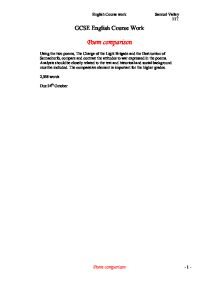 Using the two poems, The Charge of the Light Brigade and the Destruction of Sennacherib, compare and contrast the attitudes to war expressed in the poems.

GCSE English Course Work Poem comparison Using the two poems, The Charge of the Light Brigade and the Destruction of Sennacherib, compare and contrast the attitudes to war expressed in the poems. Analysis should be closely related to the text and historical and social background must be included. The comparative element is important for the higher grades. 2,368 words Due 24th October The Charge of the Light Brigade poem tells the story of the 1854 deadly charge of six hundred heroic cavalry soldiers charging to their deaths by a false order in the Crimean war. Russia's ambition to control more countries started as the Turkish Empire collapsed which threatened the British and the French. In September of 1854 the Allies landed in Crimea of southern Russia. Shortly after the Russians attacked the British base at Balaclava and the British weaponry was stolen Lord Cardigan made the order for the Light Brigade to advance, "The Brigade will advance" at ten minutes past eleven on the 25th October. Captain Nolen made the command to retake their guns from the Russians through the valley. He told Lord Luken to give the order to Lord Cardigan, "You go to the end of the valley, to the guns and take them out!" The message was sent but misunderstood to Lord Cardigan as he ordered the Light Brigade to go straight through the middle of the valley and charge into the guns surrounding them. ...read more.

The Light Brigade were completely visible in battle, "Flashed all their sabres bare" this quote states their swords all flashed by reflecting sun light and the use of the word, "bare" is meant by the cavalry being completely visible and uncovered. Tennyson changes his theme of no hope on the 3rd line to high hope, "Sabring the gunners there" Tennyson states this to give more hope, as the soldiers get close enough to the guns to sabre the gunners Tennyson raises the theme of mystery again in the line, "All the world wondered why" this line is repeated throughout the poem too, which constantly reminds the reader of the mystery of the battle as the world wondered why the soldiers did it. Although Tennyson raises hope again in the lines, "Then they rode back but not, not the six hundred" this quote states that some did ride back alive, which suggests a victory as the previous line helps this statement, "Right through the line they broke" this already tells the reader for sure the Light Brigade did manage to charge through the line. The fifth verse starts the same as the third verse which portrays the battle mostly as hopeless and dangerous. Tennyson copies the beginning of this verse to add effect to the bravery and obedience of the Light Brigade, "While horse and hero fell, They that had fought so well, Came through the jaws of Death, Back from ...read more.

"The lances uplifted, the trumpet unblown" this quote is from the Destruction of Sennacherib. The trumpet was unblown because the order to advance was never made. There is a contrast between the celebrations to the soldiers from the Charge of the Light Brigade for battling heroically, "Honour the charge they made" and the sorrows from the people of Ashur (an ancient city of Assyria) because of all the men dead before the battle took place, "Hath melted like snow in the glance of the Lord" most people believed the army died from the praying to the god of the town of Galilee which was where the army was planning to invade. This quote means the soldiers died as the god looked upon them. In my personal opinion, both of these poems deserve a place in war poetry because of their accuracy in their relation of events and their common war themes such as death and sorrow. I do like how the Charge of the Light Brigade is so fast paced and full of short and bright verses to symbolise the glorious outcome, although Tennyson makes clear their sacrifice was avoidable and pointless, where as the Destruction of Sennacherib has long and descriptive lines making it sound more melancholy. Lord Byron also writes of pointless avoidable sacrifice as Sennacherib's army is killed as they sleep, but the outcome is not depicted as glorious, but simply as tragic. English Course work Samuel Varley 11T Poem comparison - 1 - ...read more.