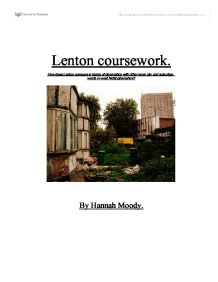 Lenton coursework. How does Lenton compare in terms of deprivation with other inner city and suburban wards in west Nottinghamshire? By Hannah Moody. Part one (A): the location of Lenton Lenton is located in the south west of Nottingham, approximately 2 miles from the city centre, north of derby road and surrendered by the neighbouring areas that are: Forest fields and Sherwood rise (north), The Park (east), Wilford (south) and Wollaton (west). Part one (B): Definitions Deprivation: is to go without basic needs * Material deprivation, which reflects the access people have to material goods and resources. Access to these goods and resources enables people "to play the roles, participate in relationships and follow the customary behaviour which is expected of them by virtue of their membership in society" (as described by Townsend). * Social deprivation has been separately distinguished as relating to people's roles and relationships, membership and social contacts in society.3 * Multiple deprivations relates to the occurrence of several forms of deprivation concurrently, such as low income, poor housing, and unemployment. As this can be particularly stressful for families. Quality of life: this is things that cannot be measured they may be: * Physical heath: this is to do with diet, health and protection against pain and disease * And/ or psychological health: feeling like you belong in a community (socially and in the local services) and by being free from worries and/or stress. Standard of living can be measured. It refers to the quality and quantity of goods and services available to people in an area, and the way these goods and services are distributed and shares within a particular population. It is generally measured by standards such as income per person and poverty rate. Other measures could be access and quality of health care, income growth inequality, educational standards. Examples are access to certain goods (such as number of refrigerators per 1000 people), or measures of health such as life desires. ...read more.

Area A1 The area A1 is the oldest; it is homed by students and working class families and elderly residents, its characterised by its red brick, Victorian terraced housing. Some houses have been renovated, but most are still fairly run down, this is due to the transient neighbourhood, primarily lived in by students who will live in this area for approximately a year at a time. Windows are broken in many houses, and in some, security bars have been fitted, which show residents are trying to protect themselves from being burgled. It was also common to see CCTV cameras in this area of Lenton. But there had been clear improvements, double glazed windows had been bitted to numerous houses and old doors had been replace. It was very clear that there were overcrowded houses and student accommodation though the area of A1 and the houses were covered in 'to let signs' from street to street. And the student life style was also very clear when walking through the area, with alcohol bottles on roads and in windows, and overloaded bins on the pavement showed that the residents had no pride in the area, or space. The area was much uniformed apart from the derelict/ run down factories, and there is a huge lack of privacy, as there are no front gardens or patios to the houses, this also makes the properties very venerable to crime. Another reason for the poor quality of the housing in A1 could relate to it being in the inner city which links to high unemployment rates forcing people to rent out small cheep property, this relates to the cycle of decline. The colouring system used on the diagram shows that the housing is of a poor quality in the area. Area A2 This is the 'posh' part of Lenton; it is close to the queen's medical centre and the university. ...read more.

But in contrast other parts for instance A3 are seriously deprived, there is a high unemployment rate, and school grades are poor and do need some serious improvements. Part 5 Method of study Advantages Disadvantages Improvements 1.census information * Data from 1991-2001 * Many deprivation indicators * Compares Lenton to other areas * Looks at Lenton as a whole, and not at A1,2,3 so it isn't very specific * Does not have the data for 2008 to make it resent * Only looks at some deprivation indicators. * Look at more current statistics for Nottingham. * Look at more deprivation indicators. 2. shaded mapping * Get a good look at the housing in the 3 areas being studied to measure the quality of each individual house. * Make it more detailed 3. Housing quality survey * Gives a brief overview of the housing quality in Lenton. * * I would compare the to other inner city areas e.g. Birmingham * Look at housing in more detail 4. Environmental quality survey * Subjective and depends on the day that I recorded my data. * Go back on other days to compare results. 5.trafic counts * Gives a taste of the traffic on a weekday at a prime time. * Not a thorough look, and only recorded in a minimal space of time. * Go at different times in the day and on different days of the week. 6.questionaires * Get a view of a numbered amount of people. * Only ask a limited amount of people due to the lack of time available. * Question more people * Question one person from each of the different age groups. 7.photographs * Able to refer back to the quality of an area a look at bad or positive points in an area. * Not specific enough * Find more photographs * Take photos of specifics things to show deprivation. 8. shopping transect * This shows all the services available in the area * Take pictures of the shops to show appearance, and to how signs of deprivation. ...read more.