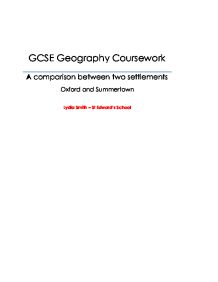 GCSE Geography Coursework A comparison between two settlements Oxford and Summertown Lydia Smith - St Edward's School Geography Coursework - Lydia Smith Contents: * Section One - pages 3 - 25 * Section Two - pages 26 - 37 * Section Three - pages 38 - 82 * Section Four - pages 83 - 91 * Section Five - pages 92 - 100 * Bibliography - page 100 Section One: Introduction Contents: * Aim - What the whole investigation is based on. * Hypotheses - What I believe my results will be and what I believe the outcome of my aim will be. * Justifications - Why my hypotheses are as they are. * Background information - Information on both Oxford and Summertown (e.g. history, geography) * Glossary and theory - Glossary which describes what the different geographical terms mean. * Maps on a national, a regional and a local map - Showing where both Oxford and Summertown are on a national, regional and local scale. Aim My aim is to compare and contrast two settlements of different area and population sizes. These two settlements are Oxford (Cornmarket Street) and Summertown (Banbury Road). Cornmarket Street is in the Central Business District and Banbury Road is in a suburb. Part of comparing and contrasting will include finding out which has the larger sphere of influence and whether the population and/or size affect it. I will be using a number of different methods to collect data, including different questionnaires and Reilly's Law of Retail Gravitation to find the break point, which should help me compare the two settlements. My hypotheses are all clearly explained and I will be using them to conduct my data collection. Oxford Summertown Hypotheses and Justifications Hypothesis 1 - The sphere of influence of central Oxford will be larger than in Summertown. Justification - Central Oxford, specifically, is a very commercial area, in a way which Summertown could not compete with. ...read more.

The 7C bus came twice, both heading from Oxford. The 28A bus came once, heading towards Oxford. Buses to Summertown came from twelve different places. Oxford BUS TRAVELLED FROM 4 4B Abingdon, Cumnor, Rose Hill 2 Summertown, Kidlington, Cutteslowe 2C Summertown, Kidlington, Cutteslowe 2A Kidlington, Summertown, Oxford Brookes Uni, Headington, Barton, Risinghurst 4A Rose Hill, Botley, Elms Rise, Dean Court, Cumnor Hill 5 Blackbird Leys, Cowley, Oxford Rail Station 6 Wolvercote, Woodstock Road 35A Didcot, Abingdon, Kennington The table for the Oxford buses shows the different buses that I saw go past in five minutes. This occasion was a different one to when I counted how many buses came by to figure out the frequency, and this time it was 19. The 4 4B bus came once, the 2 bus came four times, the 2C bus came three times, the 2A bus came five times, the 4A bus came twice, the 5 bus came twice, the 6 bus came once and the 35A bus came once. Buses to Oxford came from 22 places. Oxford buses came from 22 different places, where as Summertown buses came from twelve places. This means that Oxford buses came from almost double the amount of places as Summertown. This is because of the following reasons: > Oxford has a larger sphere of influence - and due to that a much wider variety of shops, services, restaurants, entertainments and attractions than Summertown. It is also more accessible, route wise. > This is due to the fact that Central Oxford is a high order centre, thus has more high order goods and therefore a greater range of goods (the maximum distance people are willing to travel). > Oxford has more tourism (e.g. Ashmolean Museum, Randolf Hotel, University buildings, the Carfax Tower, the Bodleian Library, the Oxford camera, and the Sheldonian Theatre etc) and much more prestige due to it. > Oxford has more entertainment (e.g. ...read more.

Some problems were: > I conducted it with a partner, so we would have different views as it is completely subjective to whoever is conducting the land use survey. For example, what is low order to one person could be middle order to another. > Only conducted it on one street in Oxford (Cornmarket Street) and one in Summertown (Banbury Road). This does not give me a full view on each settlement. Some solutions would be: > Only one person to conduct land use survey to avoid a difference in opinion. > Conducting land use survey in more than one street in each settlement (e.g. five streets). Conclusion: This method of data is inaccurate, therefore any results taken from this are not accurate, or as accurate as they could have been, and are therefore not valid. Had I used this method to define my results and conclusion, they would not have been reliable due to the previously stated problems. I feel there is not enough data for my results to be accurate, so it is my opinion that they are not valid. I should have collected more questionnaires, conducted all my methods when the weather was the same in both places, at the same time of day, and preferably on the same day of the week. What went well? > I have managed to collect all the data for my seven hypotheses, as required. > I have a good range of results. > My results were all in agreement with my hypotheses, except for one which was partly correct and partly incorrect. > There are no anomalies. What would I change? If I were to repeat this project, I would: > Collect more data (e.g. more questionnaires and more tax disc surveys) > Make the data more accurate by collecting it in similar conditions for the two places. > Compare Oxford to a larger settlement to make the project more interesting (e.g. London). > Compare Oxford to a settlement of similar size (e.g. Cambridge). ...read more.