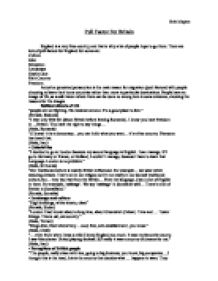 England is a very free country, and that is why a lot of people hope to go there. There are lots of pull factors for England but some are:

choosing to leave their home countries rather than move to particular destinations. People have an image of Uk, as a safe haven where there can be done no wrong here is some evidence, showing the reasons for the images.

“people are not fighting. No violence around. It’s a good place to live.”

“I hear only little bit {about Britain before leaving Romania}. I know you have freedom

in …Britain. You have the right to say things…

“{I knew} it is a democracy…you can think what you want… it’s a free country. Everyone

“I decided to go to London because my second language is English. I can manage. If I

go to Germany or France, or Holland, I couldn’t manage, because I have to learn that

Language. London is no problem.”

“Our traditional culture is mainly British influenced. For example… we wear white

wedding dresses. That’s not in our religion ad it’s not really in our Somali traditional

culture, but… they had that from the British… Even the language, {has} a lot of English

in there. For example, ‘cabbage’. We say ‘cabbage’ in Somali as well… There’s a lot of

“London I had known about a long time, about Greenwich {Mean} Time and … Tower

Bridge. This is old, old country.”

“… even from when I was a child I loved England too much. It was my favourite county.

I saw Manchester United playing football. SO really it was a country of dreams for me.”

“In Iran… even the normal people they say English people are … cold, they don’t talk to

anybody, they are not friendly”

What role do the agents play in channelling asylum seekers to the UK?

“[The agent said I am] sending a group to Britain… ‘Do you want to go with them?’. I

“The person told me…’I have a ticket and you can go to London, to England”, so I say ‘I

have to take that chance to go’

“if I go [to] America or Australia I have to spend more money. If I come [to the UK] I’d

“The agent tell[s] me UK is best for refugee at the moment. Government accepts many

“I wanted to go to France…[or]…Sweden, but agent says England is better…”

3. Family and Friends in the UK

and thus one of the strongest pull factors for migration?

“..when we have to leave the country, we just think about her because my brother was

here, it as better for us to come here.”

“I don’t think we came because there was much attraction to come here, to be quite

honest. It’s because we had those two friends [here]. That was the link. We felt that

we were not going to be isolated. That there would be somebody that we could speak to

in Spanish [and] …from Chile. There was somebody that we liked and loved and it will

help… our sense of... homesickness”