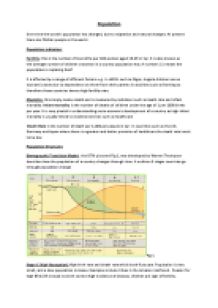 Population ( Demographic Transition Model) and Q and A on rivers

﻿Population Over time the world?s population has changed, due to migration and natural changes. At present there are 7billion people in the world Population indicators Fertility: this is the number of live births per 100 women aged 15-49 in 1yr. It is also known as the average number of children a woman in a country population has. A number 2.1 means the population is replacing itself It is affected by a range of different factors e.g. In LEDCs such as Niger, Angola children are an economic asset due to dependence on them from their parents in activities such as farming so therefore these countries have a high fertility rate. Mortality: this simply means death and is measured by indicators such as death rate and infant mortality. Infant mortality is the number of deaths of children under the age of 1 per 1000 births per year. It is very pivotal in understanding socio-economic development of a country as high infant mortality is usually linked to essential services such as healthcare Death Rate is the number of death per 1,000 per people in 1yr. In countries such as the UK, Germany and Japan where there is a greater and better provision of healthcare the death rate tends to be low Population Structures Demographic Transition Model: the DTM pictured Fig 1, was developed by Warren Thompson describes how the population of a country changes through time. It outlines 5 stages countries go through population change Fig 1 Stage 1 (high fluctuation) High birth rate and death rate which both fluctuate. Population is very small, and a slow population increase. Examples include tribes in the Amazon rainforest. Reason for high BR & DR include no birth control high incidence of disease, children are sign of fertility. Stage 2(early expanding) high birth rate and falling death rate. The population starts to increase rapidly. Reasons for the falling BR include improved public health, better nutrition. ...read more.

? Also occurs when the river no longer has enough energy to carry its load e.g. in convex banks of a meandering river or when it flows into a course with gentle gradient. ? Coarser and heavier loads are deposited first followed by finer materials, including dissolved materials. These finer materials are usually deposited at the mouth of the river e.g. the sea or lake. ? It is more prominent in lower course where the speed of flow is slow and the load is at its maximum. E.g. estuaries 8. Using well-labelled diagrams, explain the formation of the following erosional landforms: (a) Valleys and gorges (b) Waterfalls (a) ? Valleys and gorges are usually found in upper course where vertical erosion is prominent. ? In the upper course, the volume of flow is small but the gradient is steep. ? The swift flowing water exerts a powerful force on the river bed eroding, forming a steep V-shaped valley through the processes of hydraulic action, abrasion and sometimes solution. ? A gorge is an exceptionally deep and narrow valley (Fig 3.14) and it is formed when the river erodes vertically through resistant rocks leaving very steep valley walls. (b) Waterfalls are found in the upper course of a river when the gradient of a river bed drops suddenly, the water plunges down from a great height to form a waterfall. There are two ways a waterfall can form. - When a river flows over rocks with unequal resistance, the less resistant rocks downstream will get eroded much faster than the resistant layer ? Processes of erosion like hydraulic action, abrasion and solution break down the less resistant rock. ? Over time, this results in a sudden change in gradient and causes the water to plunge. ? As water plunges and hits the bottom of the waterfall, the force of plunging water together with the swirling rocks erode the river bed to form a plunge pool.? An example is Iguazu Falls, at the border of Argentina and Brazil. ...read more.

Vegetation planting and clearance · It is a useful strategy as vegetation helps to slow down the flow of water · Roots of the vegetation bind the soils and stabilise the river banks. · It is an effective strategy in the long term and it improves the stability of channel. · However the weight of trees could cause river banks to collapse and vegetation can contribute to 'accumulation of wood debris in river and thus deflect water flow, accelerate bank erosion, slow down the flow and encourage flooding. Evaluation of vegetation and clearance: · This seems to be a more effective way to manage river channels, even though the presence of vegetation could hinder the flow of water. · Proper maintenance of such vegetation would improve the stability of river channels. · It is a cheaper and more preferable measure compared to the construction of artificial structures and incurring high cost due to the need to alter the natural course of the river. Bank protection · It involves the building of artificial levees, dykes or embankments to prevent river banks from collapsing during heavy rains when volume of rainwater increases tremendously. · It is an effective strategy in the short term. · However it is ineffective in the long term. · It requires a lot of resources (e.g. funds) and manpower. · It is also aesthetically unappealing. · The building of defence along one stretch will lead to increased erosion in other parts of the river. Evaluation of bank protection: · It is an effective short term measure, but its effectiveness in the long term is doubtful. · Often, the building of defences along one stretch of the river will lead to an increased erosion rate on other parts of the river. · Such measures will require high costs in building and maintenance of these structures, which will also interfere with the river's natural course and are considered to be aesthetically unappealing. ...read more.