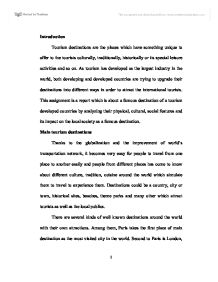 Introduction Tourism destinations are the places which have something unique to offer to the tourists culturally, traditionally, historically or its special leisure activities and so on. As tourism has developed as the largest industry in the world, both developing and developed countries are trying to upgrade their destinations into different ways in order to attract the international tourists. This assignment is a report which is about a famous destination of a tourism developed countries by analyzing their physical, cultural, social features and its impact on the local society as a famous destination. Main tourism destinations Thanks to the globalization and the improvement of world's transportation network, it becomes very easy for people to travel from one place to another easily and people from different places has come to know about different culture, tradition, cuisine around the world which simulate them to travel to experience them. Destinations could be a country, city or town, historical sites, beaches, theme parks and many other which attract tourists as well as the local publics. There are several kinds of well known destinations around the world with their own attractions. Among them, Paris takes the first place of main destination as the most visited city in the world. Second to Paris is London, and Bangkok stays in the third place. For detail of the ten most visited cities in the world and world top destinations by the level of international tourist arrivals and income generating industry, see the following tables. ...read more.

The excess amount of tourism may lead to very damaging repercussions: the transformation of traditional hospitality in many countries into commercial practice results in economic factors superseding personal relationship. Further results will be prostitution, begging, drug trafficking, relaxation of morals, loss of dignity and the appearance of consumerist behaviors. Moreover, it also has big issue about the negative impacts on the physical features and natural environment by causing pollutions, improper waste disposal, overcrowding and congestion, environmental hazards, ecological disruption and damage to historic and archaeological sites. Top contrasting destinations in the world A recent survey of world popular tourist destination conducted by travel websites specialists Trip Advisor revealed a list of world's 100 best travel destinations in 2008 through a mixture of popular forums and articles and direct questions to the members of the sites (Tom James, 2008) Surprisingly, the French famous cities are not in top ten as well as UK's cities such as Bath, England, Edinburgh and Scotland even though they are prominent in the survey. Here is the list of world's best traveler choice destinations. 2008 Travellers' Choice World Destinations 1. Milford Sound, New Zealand 2. Queenstown, New Zealand 3. Philipsburg, St. Maarten 4. Cayo Largo, Cuba 5. Rhodes, Greece 6. Charlotte Amalie, St. Thomas 7. Cruz Bay, St. John 8. Bridgetown, Barbados 9. Banff, Canada 10. Lake Tahoe, California According to the list, Milford and Queenstown of New Zealand stand on the first and second spots. ...read more.

For a destination itself to be attractive to the tourists, it must have distinctive features to offer with the help of other tourism outlets such as hotels, transport, restaurants, motels and etc. A destination like Shanghai, a city of mixed eastern and western culture with modernization and historical attractions, is a worth visiting destination. Shanghai has been promoting its tourism in many ways. Now in order to get the global attention; China has opened 2010 World Expo's in Shanghai. Almost 250 countries and international organizations are showcasing their culture in an event themed around sustainable development. Some 70 million visitors - mostly Chinese - are expected to visit the Expo, which will be open for the next six months (BBC, 2010). By holding this Expo's, Shanghai is expected to get more attention from all over the world and international tourist arrivals. According to UNWTO, China will have the largest tourism industry in the world within next few years as it has lots of beautiful destination and its culture itself becomes attractive to the people around the world. It has already got the fourth place as a largest industry and its largest port city as well as main economic center; Shanghai stands in the tenth place as the most visited city in the world in 2007. It is no doubt that the tourism in Shanghai will develop more in the future by the help of 2010 World Expo's and its attraction. And there will be more development when it has conquered its language problem for the tourists. ...read more.