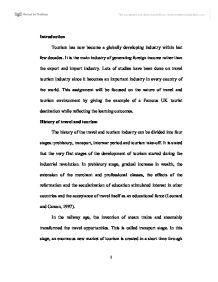 This assignment will be focused on the nature of travel and tourism environment by giving the example of a Famous UK tourist destination (Oxford) while reflecting the learning outcomes.

Introduction Tourism has now become a globally developing industry within last few decades. It is the main industry of generating foreign income rather than the export and import industry. Lots of studies have been done on travel tourism industry since it becomes an important industry in every country of the world. This assignment will be focused on the nature of travel and tourism environment by giving the example of a Famous UK tourist destination while reflecting the learning outcomes. History of travel and tourism The history of the travel and tourism industry can be divided into four stages: prehistory, transport, interwar period and tourism take-off. It is stated that the very first stages of the development of tourism started during the industrial revolution. In prehistory stage, gradual increase in wealth, the extension of the merchant and professional classes, the effects of the reformation and the secularization of education stimulated interest in other countries and the acceptance of travel itself as an educational force (Leonard and Carson, 1997). In the railway age, the invention of steam trains and steamship transformed the travel opportunities. This is called transport stage. In this stage, an enormous new market of tourism is created in a short time through the introduction of organized tours, travel packages, poster and brochures. So it is clear that the tourism was started to take off through the help of transport development. ...read more.

One significant example is Burma which is under the monopoly of the military Junta General Than Shwe. The country is one of the developing countries in Asia. This country with temperate climate has good geographical, social features and can offer different kinds of destinations. However, the tension between the military government and the world biggest country like USA and UK, result in the improper development in tourism and economic sectors. In a different way, sometimes the political changes can have good result in international tourism of a country. For example, in UK, during the election period, the value of its currency had decreased as a result of economic breakdown. However, it became a chance for those people from other countries to visit UK because it would be cheaper than any time before. Factors affecting on Tourism Demand There is different range of factors affecting on tourist demand in considering visiting a destination or a country. Roughly, these influencing factors can be divided into few categories- (1) Economy (2) Politics (3) Crisis and Threat (4) Demographic change and (5) Technology. Furthermore, changes in consumers' attitude and the tourism industry itself can also be taken into account of influencing factors on demands. The demand of tourists can be greatly depend on their level of disposable income (individual's economic situation and motivation on travel). ...read more.

This is also called cultural pollution and as a result the significance of the host community which is originally attractive to the tourists will become faded. There will also be an uneven distribution of goods and amenities between the local people and the tourist as tourist become the first priority of the industry. Meanwhile, thanks to the tourism, the host community comes to know about the different people and different culture while staying in one place. This help to improve the relationship between the tourists and the local people. As tourism enhance, the government has to fulfill needs and demands and develop the amenities and infrastructure of the destination. It is the mutual benefit for local people since they can also get more facilities and higher living standard can be expected. Furthermore, that will be a great chance to let the world knows about the culture, traditions, festivals, cuisine and entertainment of the host country. Conclusion In conclusion, the travel and tourism industry has a broad environment which includes different kind of important sectors for a country's development and tourism itself. By understanding these factors, it is clearly seen that how important the travel and tourism is for a country and why it becomes an important industry in both developed and developing countries. This assignment will highlight the importance sectors of the tourism by giving small example of a famous UK destination, Oxford. ...read more.