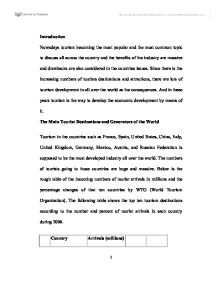 Trends in tourism. Thailand as a tourist destination.

Introduction Nowadays tourism becoming the most popular and the most common topic to discuss all across the country and the benefits of the industry are massive and drawbacks are also considered in the countries issues. Since there is the increasing numbers of tourists destinations and attractions, there are lots of tourism development in all over the world as the consequences. And in these years tourism is the way to develop the economic development by means of it. The Main Tourist Destinations and Generators of the World Tourism in the countries such as France, Spain, United States, China, Italy, United Kingdom, Germany, Mexico, Austria, and Russian Federation is supposed to be the most developed industry all over the world. The numbers of tourists going to those countries are huge and massive. Below is the rough table of the incoming numbers of tourist arrivals in millions and the percentage changes of that ten countries by WTO (World Tourism Organization). The following table shows the top ten tourism destinations according to the number and percent of tourist arrivals in each country during 2006. 2006 rank Country Arrivals (millions) Percent change 2005/2004 Percent change 2006/2005 2005 2006 1. France 75.9 79.1 1.0% 4.2% 2. Spain 55.9 58.5 6.6 4.5 3. United States 49.2 51.1 6.8 3.8 4. China 46.8 49.6 12.1 6.0 5. Italy 36.5 41.1 -1.5 12.4 6. United Kingdom 28.0 30.7 9.2 9.3 7. Germany 21.5 23.6 6.8 9.6 8. Mexico 21.9 21.4 6.3 -2.6 9. Austria 20.0 20.3 3.0 1.5 10. Russian Federation 19.9 20.2 0.2 1.3 Source: World Tourism Organization (WTO). Web: www.world-tourism.org By analyzing the table shown above, tourism all over the world seems to be increased in coming years and the future trends of the tourism in these countries tends to be increase since the industry plays as a vital role in the country's business and the country's economy. The table from the above shows that there was the increasing numbers of tourism in these countries and the tourism in that countries will also be increased since the government, local community are promoting to develop the tourism industry for their countries. ...read more.

Pattaya, with an enormous range of resorts, hotels and guesthouses, is its centre. If you are seeking a more relaxing experience, travel further down the coast to Rayong or Ko Samet, and the lovely islands of Ko Chang National Park near the Cambodian border. On the west coast, the resorts of Cha-am and Hua Hin attract international travellers who prefer their more sophisticated yet laid-back atmosphere. Far from the sea in the northwest of the region is Kanchanaburi, whose forested mountains, waterfalls and caves, national parks and wildlife sanctuaries on the border with Myanmar provide some of Thailand's most enthralling scenery. The 26 provinces of Central and East Coast are Ang Thong, Bangkok, Chachoengsao, Chai Nat, Chanthaburi, Chon Buri, Kanchanaburi, Lop Buri, Nakhon Nayok, Nakhon Pathom, Nonthaburi, Pathum Thani, Phetchaburi, Phra Nakhon Si Ayutthaya, Prachin Buri, Prachuap Khiri Khan, Ratchaburi, Rayong, Sa Kaeo, Samut Prakan, Samut Sakhon, Samut Songkhram, Saraburi, Sing Buri, Suphan Buri and Trat. THE NORTH The North is the birthplace of the earliest Thai civilisation and has many sites of archaeological and cultural interest. Northern people are famous for their courtesy and hospitality, and the region is also noted for its variety of cultural traditions. Many tourists from the surrounding provinces converge on Chiang Mai for the annual Songkran Festival, and to Sukhothai for Loi Krathong. The North falls into two distinct areas, the plains of the lower north from Nakhon Sawan to Sukhothai, and the mountainous upper north leading to borders of Myanmar and Laos. The mountain ranges along the borders are breathtaking, with waterfalls and fast-flowing rivers ideal for rafting. They are also the home of many ethnic hill people. The region has three seasons, hot from March to May, wet from June to November and cool from December to February. High up in the mountains, though, "cool" may often mean extremely cold. The Thai nation had its origins in the North, in city states that were gradually incorporated into the Lanna kingdom centred on Chiang Mai. ...read more.

In the year 2003, there was a problem of the health through out the whole country. There was a crisis because of the outbreak of Severe Acute Respiratory Syndrome, or SARS. Most tourist at that time, were afraid of going outside and even if they did, they all came up with the protective masks. This time, however, the rebound could be weaker and take longer. "It's much worse this time because people saw the city burning" after battles between antigovernment Red Shirt protestors and the military, said Apichart Sankary of the Association of Thai Travel Agents. "This has never happened before." International tourist arrivals and revenues could fall between 10% and 20% this year, analysts said, depending on whether the protests flare up again. Such a decline would present serious problems for the country's economy, which relies on tourism for roughly 6% of gross domestic product and for more than 15% of its jobs. Conclusion For the development in the tourism sector of Thailand, the government should promote the health care for both the local community and the tourists visiting to them. Moreover, if the government educate the tourists and promoting environmentally friendly products and if they do so, tourists are become aware of the environment and they can save the environment as the whole. Last but not least, the government should promote safety and security for the tourists visiting to that country. If they do like the above that I mentioned, the tourism industry in Thailand will definitely develop and it can increase the country economy as well. Reference: Books Boniface B C and Cooper C P- Worldwide Destinations: The Geography of Travel and Tourism (Butterworth - Heinemann, 2001) Frechtling D C- Forecasting Tourism Demand: Methods and Strategies ( Butterworth - Heinemann, 2001) Rob Davidson - Tourism 2ND Edition (LONGMAN) Rob Davidson- Travel and Tourism in Europe (LONGMAN) Pauline Horner - The Travel Industry in Britain (Stanle Thrones) Leonard J. Lickorish & Carson L. Jenkins- An International Tourism (Butterworth - Heinemann) Lecture notes from Margaret Amankwah Websites www.mintel.com www.infoplease.com www.travour.com www.dubaitourism.com www.tourismthailand.com Journals journals.worldnomads.com ?? ?? ?? ?? 1 ...read more.