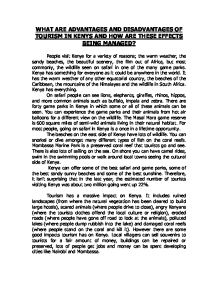 what are the advantages and disadvantages of tourism in kenya

WHAT ARE ADVANTAGES AND DISADVANTAGES OF TOURISM IN KENYS AND HOW ARE THESE EFFECTS BEING MANAGED? People visit Kenya for a variety of reasons; the warm weather, the sandy beaches, the beautiful scenery, the film out of Africa, but most commonly, the wildlife seen on safari in one of the many game parks. Kenya has something for everyone as it could be anywhere in the world. It has the warm weather of any other equatorial country, the beaches of the Caribbean, the mountains of the Himalayas and the wildlife in South Africa. Kenya has everything. On safari people can see lions, elephants, giraffes, rhinos, hippos, and more common animals such as buffalo, impala and zebra. There are forty game parks in Kenya in which some or all of these animals can be seen. You can experience the game parks and their animals from hot air balloons for a different view on the wildlife. The Masai Mara game reserve is 600 square miles of semi-wild animals living in their natural habitat. For most people, going on safari in Kenya is a once in a lifetime opportunity. The beaches on the east side of Kenya have lots of wildlife. ...read more.

In coastal areas such as Mombassa, people go on boat tours to snorkel and swim in the warm, clear water. Here, they can look at the hundreds of different types of coral and fish. The coral gets damaged and can die because the tourists touch and stand on the delicate sea bed. In the game reserves, the minibus drivers get better tips if they get really close to the animals. Because of this, the drivers often go off road frightening the animals. Going off road also means that the grass turns into dust, destroying the natural habitat of the animals. In the rainy season these dusty patches turn into mud where minibuses get stuck. People then avoid these muddy patches causing even more mud. This is an ever lasting problem. The natural landscape is being cleared for big 5 star hotels to be built. This forces the animals to move to less pleasant areas of the game reserves. Tourism also has a bad effect on the Kenyan people. The tourists can offend Kenyan people from the clothes they wear on holiday. In Kenya, most of the people are Muslim where the women completely cover their bodies up. Tourists in Kenya generally wear short tops, shorts, miniskirts or swim wear. ...read more.

Eventually tourists will stop going to Kenya so then, the Maasai people wouldn't receive ay money so this idea isn't sustainable. By encouraging people to go to the smaller parks, these parks will get over crowded and the ones that are popular at the moment will become really empty. So what can the Kenyan government do to keep the tourists visiting Kenya? I think they should restrict the number of people that enter the reserves to stop the problem of overcrowding. So the Maasai people still get given money, I would increase the prices a bit to help the traditional Kenyans survive in their traditional villages. People should have to pay to visit the Maasai villages so the villagers can buy food, get an education and get clean, safe water. There are problems that can't be stopped in Kenya such as the environment getting polluted as this is a worldwide problem. Some of the problems that Kenya has got from tourism aren't deliberate and accidental but some are caused by people wanting to ruin Kenya's landscape and environment. Some of these problems need to stop such as the drugs but the Kenyan government needs help to make Kenya continue to be a popular tourist destination. ...read more.