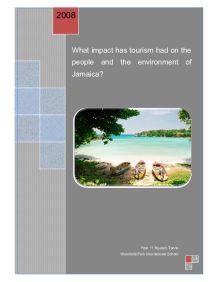 What impact has tourism had on the people and the environment of Jamaica?

Jamaican fishermen have also suffered a lot because of this negative consequence of tourism. Since the risk of getting disease by eating seafood has increased the number of consumers of seafood has decreased and the profitability of the island's fishing industry has diminished in a critical rate ("Tourism - Environmental Impacts"). It might seem that the local farmers have made a huge profit thanks to the greatly developing tourism industry because of application of multiple effects. However, in reality they have not. As most tourists demand familiar menu and tastes they are used to rather than the local food it is rare for hotel businesses to purchase anything from the local farmers and have generally resorted to importing food from foreign countries. Consequently, most of local farmers have been concerned with decreasing incomes. Also, according to WTO (World Tourism Organization), 34 percent of workforces in Jamaica depends directly or indirectly on tourism ("Encyclopedia of the nations"). This fact indicates that other 66 percent of workforce is not dependant on tourism industry. Increasing demands for basic services such as airports, roads and other infrastructures and goods for tourists costs the local government and increase taxes as the tourism has developed. Furthermore, this has also often caused price hikes too. These problems have negatively influenced more than half of the local residents whose income does not increase proportionally. ...read more.

Word Count : 1864 Book 1. Sue , Warn. Tommorow's Geography . 1st . London : Hodder Headline Pdc , 2001 . Website 1. "Economical impact of tourism ." Tourism . UNEF(United Nations Environmental Programme). 25 Mar 2008 <http://www.uneptie.org/pc/tourism/sust-tourism/economic.htp>. 2. Elaina , Kozyr . "Negative impacts of tourism ." carribean studies . 25 Mar 2008 <http://saxakali.com/caribbean/ekozyr.htmhttp://en.wikipedia.org/wiki/Jamaica>. 3. "Environmental impact of tourism ." Tourism . UNEF(United Nations Environmental Programme). 25 Mar 2008 <http://www.uneptie.org/pc/tourism/sust-tourism/env-3main.htm>. 4. "Jamaica Economy ." All-jamaica.com . 24 Feb 08. FAS . 25 Mar 2008 <http://www.all-jamaica.com/jamaica/economy.html>. 5. "Jamaica." Encyclopedia of the nations . 05 Mar 08. JRank. 25 Mar 2008 <http://www.nationsencyclopedia.com/economies/Americas/Jamaica.html>. Image 1. Fizzo Brown. Jamaica Beach. 05 Mar 2008 <http://fizziobrown.blogspot.com/> Appendix A This appendix explains what eutrophication is and how it can result in smothering coral reefs. Eutrophication happens when an excess amount of nutrients accumulates on a seabed. It leads to algae to bloom dramatically which fluctuates the concentration of oxygen in the ocean. This can smother and kill coral reefs. Appendix B This appendix explains what a bioaccumulation effect is and how it makes it really difficult for the locals of Jamaica to eat seafood. Since some poisonous chemicals from sewage are not biodegradable, they accumulate in bodies of aqueous livings and become more concentrated as you go up the food chain. If the locals eat seafood whose concentration of chemicals reaches a certain level it can cause disease and even lead to their deaths. ?? ?? ?? ?? Geography Research Project on Tourism Ryutaro Tanno 11K ...read more.