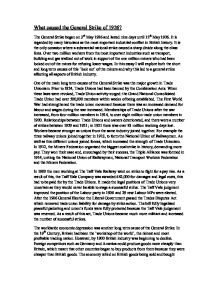 Causes of the General Strike

What caused the General Strike of 1926? The General Strike began on 3rd May 1926 and lasted nine days until 12th May 1926. It is regarded by many historians as the most important industrial conflict in British history. It is the only occasion where a substantial national strike caused a sharp divide along the class lines. Over two million workers from the most important industries such as transport, building and gas walked out of work in support of the one million miners who had been locked out of the mines for refusing lower wages. In this essay I will explore both the short and long term causes of this `lock out` of the miners and why this led to a general strike affecting all aspects of British industry. One of the main long term causes of the General Strike was the major growth in Trade Unionism. Prior to 1824, Trade Unions had been banned by the Combination Acts. When these laws were revoked, Trade Union activity surged: the Grand National Consolidated Trade Union had over 500,000 members within weeks of being established. The First World War had strengthened the trade union movement because there was an increased demand for labour and wages during the war increased. Memberships of Trade Unions after the war increased, from four million members in 1914, to over eight million trade union members in 1920. ...read more.

Coal mining had always been a very dangerous job. Between 1922 and 1924, 597,194 miners were injured. Although coal mining created huge profits, workers received very low wages, and the conditions were very bad. The miners felt they were being treated very unfairly. Even before the First World War, miners had been campaigning for improvements in their working conditions and their pay. So, after the war, miners returned to the mines with high hopes for the future, with the promise of `homes fit for heroes`. Therefore they were particularly disappointed and upset that the politicians had not done the things they said they would. Miners who had carried on working in the mines during the First World War enjoyed many improvements in their work. This was mainly because the government took over control of the mines. Wages were increased and standardised. Before the war wages depended on how cheap and easy their work was at each individual mine, therefore wages varied from mine to mine. Most miners hoped that all mines would remain nationalised after the war; however Lloyd George allowed the mines to go back into private ownership in 1921. This was despite the `Sankey Commission` which recommended increased wages, a seven hour day and the mines to remain nationalised. Lloyd George refused to allow the coal industry to become nationalised, claiming he had promised to give back the mines back to the mine owners after the war. ...read more.

However the mine owners' response to the depression was not to modernise but to cut wages and increase working hours, which angered the miners. Wage cuts meant that the miners were deeply resentful towards their bosses. The growth in Trade Unionism meant that successful strikes in 1912 led to the birth of a Triple Alliance, concerning three of Britain's biggest industries. When answering this question, we must recognise that this was a General strike and involved not just the miners, but workers all over Britain. Therefore it is clear to me that the development of the Trade Union Congress and the Tripple Alliance, led to a strike not just involving miners, but to workers from other industries also. However there were other factors which contributed to a General strike in the short term. The subsidiary of the Government allowed them to prepare for a strike, through the OMS. Middle class volunteers were happy to work throughout all the industries concerned, because they believed the strikers to be revolutionaries. This fear intensified when the Daily Mail published a letter from the RUSSIAN communist leader, urging British Communists to start a revolution. This frightened middle class, and was determined to oppose the demand of the workers by joining the OMS. This meant that the Government were unwilling to negotiate any further. Although I believe that the long term causes such as the depression and the growth of Trade Unionism, it is unclear to what extent events such as the overestimation of the Pound, or the Sankey commission contributed to the General strike. ...read more.