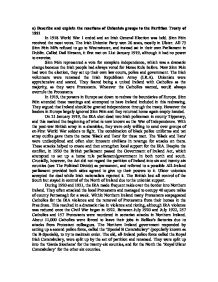 a) Describe and explain the reactions of Unionists groups to the Partition Treaty of 1921 In 1918 World War 1 ended and an Irish General Election was held. Sinn F�in received the most votes. The Irish Unionist Party won 26 seats, mostly in Ulster. All 73 Sinn F�in MPs refused to go to Westminster, and instead sat in their own Parliament in Dublin. Called Dail Eireann, it first met on 21st January 1919, although it had no power to exercise. Sinn F�in represented a vote for complete independence, which was a dramatic change because the Irish people had always voted for Home Rule before. Now Sinn F�in had won the election, they set up their own law courts, police and government. The Irish volunteers were renamed the Irish Republican Army (I.R.A). Unionists were apprehensive and scared. They feared being a united Ireland with Catholics as the majority, as they were Protestants. Whatever the Catholics wanted, would always overrule the Protestants. In 1919, the powers in Europe sat down to redraw the boundaries of Europe. Sinn F�in attended these meetings and attempted to have Ireland included in this redrawing. They argued that Ireland should be granted independence through the treaty. However the leaders in Europe largely ignored Sinn F�in and they returned home again empty-handed. ...read more.

The old, all-Ireland police force called the Royal Irish Constabulary, were split up by the act of partition and renamed. They were split up into the 'Garda Siochana' for the twenty-six counties, and for the North the 'Royal Ulster Constabulary' for the other six counties. The outbreak of civil war relieved the government of Northern Ireland of pressure and allowed them to use extremely repressive measures against the nationalist population. The result in the North was a semi-permanent peace. The Political Divide After the Anglo-Irish Civil war of 1918-1921, Ireland was partitioned into the North and South. Six northern counties (Armagh, Antrim, Down, Tyrone, Fermanagh and Londonderry) remained part of the U.K of Great Britain and Northern Ireland. The twenty-six remaining counties in Ireland formed part of what is known as the 'Irish Free State' and would have its own army, although it would remain within the British Commonwealth. Britain would also have a representative in Ireland and would keep some naval bases in Irish waters. The partition treaty also set up a Boundary Commission that was to fine-tune the border to take account of Unionist/Nationalist communities close to it. The Sinn Fein leader, Eamonn de Valera, became the first Prime Minister of the Irish Free State. He was a very devout Catholic and strengthened the Catholic Church in the new state. ...read more.

The fixing of boundaries in this way was called gerrymandering. After the divide, the Unionists didn't want anything to do with the South as they were seen as traitors and back-stabbers. Unionists believed Catholicism was an oppressive, backward religion and feared that Home Rule would result in 'Rome Rule'. Moreover, they believed a parliament in Dublin run by what they regarded as 'primitive' Catholic farmers would be bad for Protestant business. The Unionists were sceptical of the divide at first, as they thought is would better to be in the majority of land - the more land they had, the more power they had in the Civil war. Catholic Reactions to the Divide The Catholic reaction to the divide of Ireland into the establishment of the Northern Ireland state was consistently hostile. In one response, the I.R.A (before and after the Anglo-Irish Treaty) was to use physical force against the new state. This was not successful and gave Sir James Craig (1871-1940) the first prime minister of Northern Ireland, the excuse to introduce three classes of parliamentary police to support the Royal Ulster Constabulary (RUC), of whom the 'B Special' constabulary were hated by the Catholic minority. Another response from the old Nationalist Party was to point out the lack of safeguards in the 1920 Act for the minority community, but neither the Unionists nor Britain took any notice. ...read more.