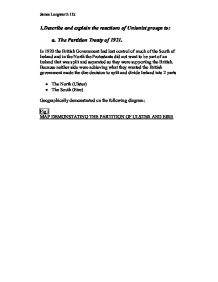 Describe and explain the reactions of Unionist groups to: a. The Partition Treaty of 1921.

1.Describe and explain the reactions of Unionist groups to: a. The Partition Treaty of 1921. In 1920 the British Government had lost control of much of the South of Ireland and in the North the Protestants did not want to be part of an Ireland that was split and separated so they were supporting the British. Because neither side were achieving what they wanted the British government made the dire decision to split and divide Ireland into 2 parts * The North (Ulster) * The South (Eire) Geographically demonstrated on the following diagram: Fig I MAP DEMONSTATING THE PARTITION OF ULSTER AND EIRE In the North, the 6 counties that were, at the time the most Protestant were given their own government. In these 6 counties there was a large Catholic minority and in 2 counties there were actually more Catholics than Protestants. This government of Northern Ireland was called Stormont. Stormont had power over the North of Ireland but this state remained part of the UK. In the South the 26 counties became the Irish Free State. This was an independent country but in the beginning it remained part of the British Commonwealth. The Irish Nationalists were unhappy about the decision split Ireland but in 1921 members of Sinn Fein and the IRA went to London and agreed with the government of that time to the temporary splitting of Ireland, this was the last time a Sinn Fein leader shook hands with a British Prime minister the next time was in 1997 at the meeting of Tony Blair and Gerry Adams. The 1921 meeting resulted in a signing of a treaty agreeing to the temporary division. This treaty was known as the Partition Treaty. It was always hoped that this would be a temporary solution both the Government and the IRA hoped these issues would be resolved so that Ireland would get over its troubles and once again it would be a united country. ...read more.

The fundamental teachings of the Catholic Church that cause disagreement in today's society, that both some Catholics and Protestants take exception to are in the following subjects: * Divorce * Abortion * Contraception Living side by side, the two communities have seen the effects religion have on their neighbours, the Protestant Unionists will have witnessed many unhappy marriages, with out the option of divorce, many large families when there has not been enough money to put food on the table and the devastating effect childbirth out of marriage has had on large numbers of young catholic girls. Noel Browne in 1971 said that : "We must recognise the fears of the Northern Protestant, that in a united Ireland he would be in a minority and that he would suffer in much the same way as the Catholic minority in Ulster." He said, " There is the position of the Catholic Church, there are the rules on mixed marriages, the right to contraception and family planning and the right to divorce". The laws of the South of Ireland can be related directly to the influence of the Church. Even in recent years as the church has been critised by Catholics the original teachings are endemic in the law. As late as 1986 a referendum on divorce rejected any change in the law, it was not until 1995 that this law was overturned. These strong religious views that affect significantly the daily lives of Catholics influence the Unionists views of the effects of a united Ireland. Introduction Northern Ireland has been a focus of attention because of the violent conflict between its people. Between 1968 and 1994 over 3 thousand people were killed as a result of this conflict, this violence is all about one simple question: ' Should the North stay part of the United Kingdom or should it join the south as part of a united independent Ireland?' ...read more.

It was hoped that a way would be found to influence both the Unionists and the Nationalists to respect each other's rights and views. Unfortunately the Unionists claimed that it was the first time since partition that the British were allowing the government of the republic a say in how the North was run. Prior to the Anglo-Irish agreement the provisional Sinn Fein were gaining support, the party was winning local government seats. In 1983 Gerry Adams (pictured) defeated Gerry Fitt and a 73 percent turnout included 14 percent of the electorate voting for Sinn Fein candidates. The British government were trying to end the crisis in Northern Ireland but unfortunately the Unionists felt betrayed At the time of the agreement the leader of the UUP said 'This agreement will not bring peace, but a sword. I have to say honestly and truthfully that I have never known what I can only describe as universal cold fury' Previously the Unionists had said that they must never 'give an inch' to Nationalists demands, therefore they saw the Anglo-Irish agreement as a complete disaster, it also reinforced the idea that the British government were not to be trusted. The Unionists were the largest group in Northern Ireland and they believed that they had not been asked about the changes they thought the new powers for Dublin were a step towards British withdrawl and a united Ireland. During 1986 the Unionists tried to oust the agreement, in March of that year there was a Unionist day of action, the Unionist local councils would not work with the government. Some Protestants turned to the paramilitaries, this resulted in increasing attacks on Catholics, who then fought back during the early1990s 't*t for tat' killings were common place and the violence continued to increase, there appeared to be a stalemate in Northern Ireland and a dire violent situation. James Longworth 11k ...read more.