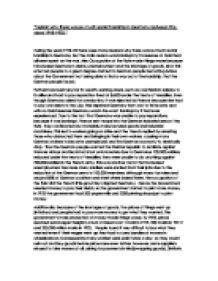 Explain why there was so much social hardship in Germany between the years 1918-1923.

"Explain why there was so much social hardship in Germany between the years 1918-1923." During the years 1918-23 there were many reasons why there was so much social hardship in Germany, but the main reason was bankruptcy; its reserves of Gold had all been spent on the war. Also Occupation of the Ruhr made things worse because it increased Germany's debts, unemployment and the shortage of goods. All of this effected people to a great degree and led to German people becoming furious about the Government not being able to find a way out of the hardship, that the German people faced. Furthermore Germany lost its wealth-earning areas, such as coal fields in Salesia, to its allies and had to pay reparation fixed at �6600 under the treaty of Versailles. ...read more.

This led to workers going on strike and the French replied by arresting those who obstructed them and bringing in their own workers, causing many German workers to become unemployed and the German economy to drastically drop. Thus the German people wanted the Weimar republic to retaliate against Frances vicious and brutal acts but unfortunately due to Germanys 100,000 soldiers, reduced under the treaty of Versailles, they were unable to do anything against 750,000 soldiers in the French army. This was another factor that increased unemployment because many soldiers were sacked from their jobs due to the reduction of the German army to 100,000 members. Although many factories and around 80% of German coal iron and steel where based there, the occupation of the Ruhr did the French little good but crippled Germany. ...read more.

People found it very difficult to buy what they wanted-even if their wages went up they had to carry bundles of money in wheelbarrows. Consequently many workers were paid twice a day- so they could rush out and buy goods before prices rose even further, however, some suppliers refused to take money at all, asking for payments in kind(swapping goods). Similarly people with savings were hit the hardest- those with money in bank accounts, insurance policies or pensions; their savings became worthless. In due course, things improved, in August 1923 a new chancellor was appointed- Gustav Stressmann. He cancelled the old mark and issued a new currency- the Retenmark; this led to a period of stability. However, a lot of German people suffered and many blamed the Weimar republic, which resulted in people looking up to extreme left or right wing movements such as the KPD to resolve their problems. ...read more.