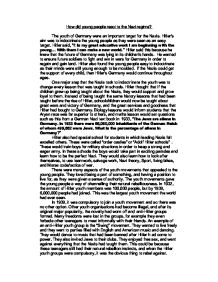 How did young people react to the Nazi regime?

How did young people react to the Nazi regime? The youth of Germany were an important target for the Nazis. Hitler's aim was to indoctrinate the young people as they were seen as an easy target. Hitler said, "It is my great educative work I am beginning with the young... With them I can make a new world." Hitler said this because he knew that the future of Germany was lying in its children's hands. He wanted to ensure future soldiers to fight and win in wars for Germany in order to regain and gain land. Hitler also found the young people easy to indoctrinate as their minds were still young enough to be moulded. ...read more.

In 1933 there were 66,060,000 inhabitants of the German Reich of whom 499,862 were Jews. What is the percentage of aliens in Germany?" Hitler also had special school for students in which leading Nazis felt excelled others. These were called "order castles" or "Adolf Hitler schools". These would train boys for military situations in order to keep a strong and eager army. In these schools the boys would take part in exciting parades and learn how to be the perfect Nazi. They would also learn how to look after themselves, to use teamwork, salvage work, Nazi theory, Sport, fixing bikes, and Morse code/tactics of war. There were many aspects of the youth movements that appealed to the young people. ...read more.

An example of an anti-Hitler youth group is the "Swing" movement. They wanted to live freely and they went to parties filled with English and American music and dancing. They would dance to music that had been banned after Hitler had come to power. They also invited Jews to their clubs. They enjoyed free sex, and went against everything that the Nazis had taught them. This could be because these teenagers still had their natural rebellion instincts, and when the Hitler youth groups were compulsory, it was the obvious thing to rebel against. In conclusion, young people did originally react well to the Nazi regime, as many were enthusiastic about Hitler and his youth groups. However popularity did fade as the war progressed and the first anti-Hitler groups began to appear. ...read more.