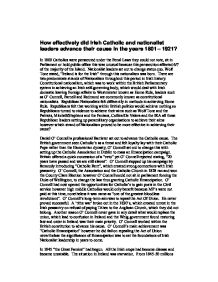 How effectively did Irish Catholic and nationalist leaders advance their cause in the years 1801 &amp;#150; 1921?

How effectively did Irish Catholic and nationalist leaders advance their cause in the years 1801 - 1921? In 1800 Catholics were persecuted under the Penal Laws they could not vote, sit in Parliament or hold public office this was unusual because this persecution affected 6/7 of the majority of the Island. Nationalist leaders set out to change status quo. Wolf Tone stated, "Ireland is for the Irish" through this nationalism was born. There are two predominate strands of Nationalism throughout this period in Irish history. Constitutional nationalism, which was to work within the British Parliamentary system in achieving an Irish self-governing body, which would deal with Irish domestic leaving Foreign affairs to Westminster known as Home Rule, leaders such as O' Connell, Parnell and Redmond are commonly known as constitutional nationalists. Republican Nationalists felt differently in methods in achieving Home Rule. Republicans felt that working within British politics would achieve nothing so Republicans turned to violence to achieve their aims such as Wolf Tone and the Patriots, Mitchell/Stephens and the Fenians, Collins/De Valera and the IRA all these Republican leaders setting up paramilitary organisations to achieve their aims however which strand of Nationalism proved to be more effective in achieving their cause? ...read more.

Unlike the first two bills, it was a well thought out piece of legislation. Parnell had achieved what O' Connell or any Republican movement before him i.e. Fenians and Young Irelanders had dreamed off. Parnell's had got Home Rule through Parliament however it was to be rejected by the House of Lords. Parnell had came to his peak he had achieved so much for the nationalist caused through the British parliamentary procedure however 1889 Parnell was found to having an affair with Kitty O Shea Gladstone and the Catholic church both condemn him, which ended his career he later dies in 1891. Parnell had achieved so much for the nationalist cause until 1888 he was considered a nationalist hero he had brought Home Rule to the brink however IPP was in ruins after his death until the leadership of Redmond. Constitutional Nationalists in the 19^th century were the main beneficiaries to Home Rule and the Nationalist Republicans although existed however never had a real voice or direction until the 20^th Century. A new strand of Nationalist had been discovered in Ireland, which was Cultural Nationalism this was forgetting about politics and concentrating on being on the Irish heritage. ...read more.