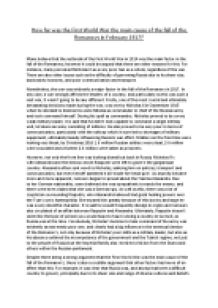 ﻿How far was the First World War the main cause of the fall of the Romanovs in February 1917? Many believe that the outbreak of the First World War in 1914 was the main factor in the fall of the Romanovs; however it could be argued that there are other reasons for this. For instance, many perceived Nicholas II as a very poor tsar as a whole, regardless of the war. There are also other issues such as the difficulty of governing Russia due to its sheer size, backwards economy, and poor communication and transport. Nonetheless, the war was evidently a major factor in the fall of the Romanovs in 1917. In any case, a war strongly affects the leaders of a country, and particularly as this was such a vast war, it wasn?t going to be any different. Firstly, one of the most crucial and ultimately devastating decisions made during the war, was one by Nicholas II in September 1915 when he decided to dismiss his uncle Nikolai as commander in chief of the Russian army and took command himself. During his spell as commander, Nicholas proved to be a very weak military leader, it is said that he didn?t look capable to command a single military unit, let alone an army consisting of millions. He also proved to be very poor in terms of communication, particularly with the railway which in turn led to shortages of military equipment, ultimately heavily influencing Russia?s war effort. ...read more.

Because of its great magnitude, communication and transport were consistently very poor throughout the country. Although the Trans Siberian had been developed and it looked like a promising prospect, it was only part done in numerous places thus still leaving Russia in a state of ?backwardness?. All in all, this left Russia a very difficult country to totally reform and modernise, meaning it trailed behind other great powers such as France and the United Kingdom. Furthermore, much of Russia was made up of a countryside setting, and peasants living here were often left unsatisfied by the Tsarist regime as many reforms were not enforced in relation to the countryside. Eventually, when someone in the form of Peter Stolypin, actually tried to make a difference to the countryside and help it progress, his plans were dismissed by Nicholas when he was fired in 1911, outlining Nicholas? reluctance to change and also his stark stubbornness. Moreover, the people Nicholas then employed were less qualified and far more repressive, meaning the peasants (80% of the population) that worked or lived in the countryside, who had previously tolerated or even supported the Tsar, now very much didn?t. In addition to this, the issues surrounding communication and transport were clearly highlighted by the war. This may be interpreted as being an argument for the war being the biggest factor in the fall of the Romanovs, however it also shows that Russia, and ultimately the Tsar were never prepared for such a full scale event and demand on resources that eventually occurred. ...read more.

The war effort also had a huge effect on the Russian currency. The problem of inflation swiftly arised and affected many people?s lives for the worst. Between 1913 and 1916 the Russian National budget rose by 800%, and this was by and large financed by taxes and borrowing from Britain and France. In order to keep up with the demand of the war effort, the government printed more money, leading to inflation, which made the currency virtually worthless. Average earning doubled between 1914 and 1916, however food prices quadrupled thus peasants in particular were left in a very poor situation. Conclusively, although I believe factors not concerned with the war somewhat contributed to the fall of the Romanovs, it appears to me that without the war the Tsar and Russia as a whole would?ve been in a far better condition and the Imperial family may have survived to rule for many more years. The war ultimately acted as a catalyst and sparked copious problems in Russia, leaving all social classes dissatisfied with Nicholas II. It could be argued that if Russia had performed better in the war, the Romanovs would?ve remained autocratic rulers; however it could also be perceived that Nicholas II was the reason for Russia?s failure during the war. Therefore, I believe that although the Tsarist government was in a fairly bad state prior to the war, WWI was the final straw for Nicholas II and was a more than big enough problem to finally end his reign. ...read more.