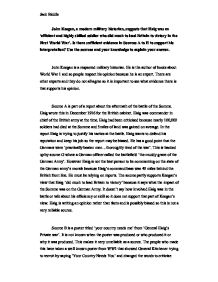 John Keegan, a modern military historian, suggests that Haig was an efficient and highly skilled soldier who did much to lead Britain to victory in the First World War. Is there sufficient evidence in Sources A to H to support his interpret

John Keegan, a modern military historian, suggests that Haig was an 'efficient and highly skilled soldier who did much to lead Britain to victory in the First World War'. Is there sufficient evidence in Sources A to H to support his interpretation? Use the sources and your knowledge to explain your answer. John Keegan is a respected military historian. He is the author of books about World War 1 and so people respect his opinion because he is an expert. There are other experts and they do not all agree so it is important to see what evidence there is that supports his opinion. Source A is part of a report about the aftermath of the battle of the Somme. Haig wrote this in December 1916 for the British cabinet. Haig was commander in chief of the British army at the time. Haig had been criticised because nearly 100,000 soldiers had died at the Somme and 5miles of land was gained on average. In the report Haig is trying to justify his tactics at the battle. Haig wants to defend his reputation and keep his job so the report may be biased. He has a good point that the Germans were 'practically beaten men...thoroughly tired of the war'. This is backed up by source G where a German officer called the battlefield 'the muddy grave of the German Army'. However Haig is not the best person to be commenting on the state of the German army's morale because Haig's command base was 40 miles behind the British front line. He must be relying on reports. The source partly supports Keegan's view that Haig 'did much to lead Britain to victory' because it says what the impact of the Somme was on the German Army. ...read more.

This is not useful for supporting Keegan's idea of Haig as a 'highly skilled soldier who did much to lead Britain to victory' but it is only Lloyd George's own view. Source F was written by Duff Cooper. He was a very clever writer who had fought in the war but not at the Somme. The extract is from the official biography of Haig that Duff Cooper had been asked to write by Haig's family after Haig had died. Cooper had access to Haig's personal diaries and was a friend of the family so he may have been well informed but he may be biased because he did not want to damage Haig's reputation. Source H says Haig was a national hero when he died. 'To refuse to fight...would have meant the abandonment of Verdun to its fate and the breakdown of co-operation with the French'. What Cooper says is accurate but it does not say anything about Haig's ability as a soldier so it is not really useful in supporting Keegan's view that Haig is a 'highly skilled soldier', but it suggests that the Battle of the Somme was important because if the allies did not fight the Germans at the Somme then all their troops could have gone to Verdun, and easily beaten the French resistance so it partly supports the view that Haig 'did much to lead Britain to victory in the First World War.' Someone who was not paid by Haig's wife to defend his reputation and with no motive to be biased could provide more reliable evidence. If we had evidence of specifically how Haig was 'efficient and highly skilled' then this source would be more useful. ...read more.

All of the sources used here may not be the same as the ones that Keegan based his assertion on. There could be other evidence that is more detailed and shows why Keegan would think Haig is 'efficient and highly skilled' and 'did much to lead Britain to victory in the First World War'. If Keegan used the same sources, he might have more information about the sources that would let him judge how reliable they were. These sources might just be part of a bigger group of evidence that Keegan bases his opinion on. The sources here do not cover the whole war. There is nothing specific about Haig's role before 1916 except for a few comments in the video like the one by Livesey about the first battle of Ypres in 1919. Passendale cost over half a million lives. Hussey and Wilson make comments about what has happened by 1918 that may be the result of what Haig has done. There is very little in the Sources so we can't be sure how Haig's actions from the whole war have influenced Keegan's opinion. More information about Haig's actions across the whole of the First World War. The video gave quite a lot of information but the rest of the sources are very short and don't give very much information. This means we may not understand how they were meant to be read or how they might look if we could see the whole extract each source came from. There is some evidence in the sources to support Keegan's view that Haig 'did much to lead Britain to victory in the First World War' particularly on source H but very little to support the view that Haig was an 'efficient and highly skilled soldier'. I agree with Keegan's view but these sources are not sufficient evidence to support his interpretation. Jack Biddle ...read more.