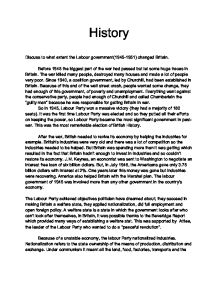 History Discuss to what extent the Labour government(1945-1951) changed Britain. Before 1945 the biggest part of the war had passed but let some huge traces in Britain. The war killed many people, destroyed many houses and made a lot of people very poor. Since 1940, a coalition government, led by Churchill, had been established in Britain. Because of this and of the wall street crash, people wanted some change, they had enough of this government, of poverty and unemployment. Everything went against the conservative party, people had enough of Churchill and called Chamberlain the "guilty man" because he was responsible for getting Britain in war. So in 1945, Labour Party won a massive victory (they had a majority of 180 seats). It was the first time Labour Party was elected and so they putted all their efforts on keeping the power, so Labour Party became the most significant government in past-war. This was the most remarkable election of British History. After the war, British needed to revive its economy by helping the industries for example. British's industries were very old and there was a lot of competition so the industries needed to be helped. But Britain was spending more than it was getting which resulted in the fact that Britain hadn't enough to invest in industries and so couldn't restore its economy. ...read more.

In July 1948, 90% of the members of the Parliament went for it. This Nation Health Service entitled everybody making people free of medical charges. This helped mostly the middle-class people because they had a very bad hygiene. But this NHS wasn't free for the government, for the first year it cost 400 million pounds. M.Sked and M.Cooke two historians said, talking about NHS: "an almost revolutionary social innovation since it improved the quality of life of most of the British people" Another achievement of Labour Party was housing. After the war, almost 700 000 houses were destroyed because of bombing so the government had to do something. Bevan was responsible for the idea of housing, reconstructing houses for people cheaply and very quickly. But the problem was that material for houses were rationed so Labour Party had the idea of prefabs, prefabricated houses that could be built in a few days. In 1948 nearly 285 000 council houses (built by the state) had been built. Labour Party also did little things that are less important than nationalization but are still significant. Omer Social Legislation Nationality Insurance Act (OSLNIA) of 1946 extended payments for sickness, unemployment, old age pensions, maternity or death grants. ...read more.

In 1947 the compulsory military service was introduced (18 months at the beginning and 2 years after 1951). In Persia a crisis began, an oil refinery owned by the British was nationalized by the Persian government. The British government wasn't able to get this refinery back so people accused the Labour Party to be weak. In 1951 the conservatives produced an attractive program : they promised that they would build 300 000 houses per year and that they would provide more red meat for the British. The Labour Party was dominated by three aspects: the cold war, the Indian decolonization and the European development. During the election of 1951, the Labour Party had 13.9 million votes against the Conservative Party which had 13.7 million votes, but the conservative party had more seats (321 against 295) so the Labour Party lost the election. People had enough of Labour government, of rationing, of the control of many things by the state, of austerity and so voted against it. There is no doubt that Attlee's government was one of the government who changed Britain the most. It excelled in combating and resolving the economic problems Britain had because of the war. It achieved to improve British's lives and society by banishing the uncertainties and fears of people caused by unemployment, houses, food... It accomplished creating and keeping a welfare state and a National Health Service which both deeply changed Britain. ...read more.