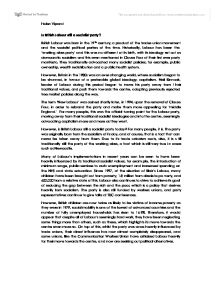 Is British Labour still a socialist party? British Labour was born in the 19th century; a product of the trades union movement and the socialist political parties of the time. Historically, Labour has been the 'working class party' and this was no different at its birth, with its ideology set out as democratic socialism and this even mentioned in Clause Four of their first ever party manifesto. They traditionally advocated many socialist policies, for example, public ownership, wealth redistribution and a public health system. However, Britain in the 1980s was an ever changing world, where socialism began to be shunned, in favour of a preferable global ideology; capitalism. Neil Kinnock, leader of Labour during this period began to move his party away from their traditional values, and push them towards the centre, adopting previously rejected free market policies along the way. ...read more.

Many of Labour's implementations in recent years can be seen to have been heavily influenced by its traditional socialist values, for example, the introduction of minimum wage, public services to curb unemployment and increased spending on the NHS and state education. Since 1997, at the election of Blair's Labour, many children have been brought out from poverty; 1.8 million from absolute poverty, and 600,000 from a relative state of this. Labour also continues to strive to achieve its goal of reducing the gap between the rich and the poor, which is a policy that derives heavily from socialism. The party is also still funded by workers unions, and party representatives continue to give talks at TUC conferences. However, British children are now twice as likely to be victims of income poverty as they were in 1979, social mobility is one of the lowest of advanced countries and the number of fully unemployed households has risen to 16.9%. ...read more.

However, I also think that Labour has definitely moved away from its once left wing approach, and now stands firmly in the middle, along with the Conservatives who would appear to have moved away from their right wing approach. All in all, I believe in this day and age, politicians and their parties will do whatever it takes to claim British constituents as their own, and this is what Labour has done, at an attempt to lure the public in by offering a mixture of socialism and capitalism. I think it would be extremely difficult for Labour to ever completely rid itself of its socialist ideals, yet the party will continue to try, in order to reach all of the capitalist UK, as illustrated with Gordon Brown at the 2008 Labour Party Conference, 'we are, we always have been and we always will be a pro business government.' ?? ?? ?? ?? Helen Vipond ...read more.