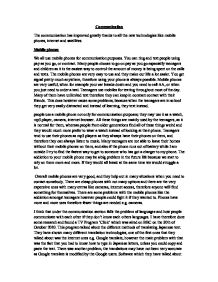 Communication The communication has improved greatly thanks to all the new technologies like mobile phones, internet and satellites. Mobile phones We all use mobile phones for communication purposes. You can ring and text people using pay as you go, or contract. Many people choose to go on pay as you go especially teenagers and children as it is the easiest way to control the amount of money is being spent on the calls and texts. The mobile phones are very easy to use and they make our life a lot easier. You get signal pretty much anywhere, therefore using your phone is always possible. Mobile phones are very useful, when for example your car breaks down and you need to call AA, or when you just need to order a taxi. ...read more.

Many teenagers are not able to leave their homes without their mobile phones on them, and also if the phone runs out of battery while I am outside I try to find the fastest way to get to someone who has got a charger to my phone. The addiction to your mobile phone may be a big problem in the future life because we start to rely on them more and more. If they would all break at the same time we would struggle a lot. Overall mobile phones are very good, and they help out in many situations when you need to contact somebody. There are cheap phones with not many options and there are the very expensive ones with many extras like cameras, internet access, therefore anyone will find something for themselves. ...read more.

Google translate, however the main problem with that was the fact that you had to know how to type in Japanese letters, unless you could copy and paste the text. There was another problem, the translations may have not been very accurate as Google translate is modified by the Google users. Software which they have talked about was an app for iPod touch where you can draw different Japanese symbols and it would tell you what they are, however you need to know the stroke order. The device that they liked the most was called Quicktionary which reads separate words and then gives you a dictionary description of its meanings. All of the above technologies are designed to help people communicate with each other whatever their language is. There are still many problems with every single one of those however as the technology proceeds they will slowly disappear. ...read more.

In summary, the report is OK. The report does state a number of benefits and one drawback of the usage of mobile phones. However the report is missing justification, and the student fails to explain their report fully. The opening ...

In summary, the report is OK. The report does state a number of benefits and one drawback of the usage of mobile phones. However the report is missing justification, and the student fails to explain their report fully. The opening paragraph is lacking detail, and should explain how communication has been improved/developed though-out the years, due to technology. This isn't within the report. The report states 'we all use mobile phones', this is in-correct. A number of people within the UK do not have mobile phones. These types of people are usually young and old people, which may not see the need to purchase a mobile phone. The examiner is looking for accurate writing, and this statement is false and should be removed from the report. The student has written that teenagers use pay as you go, however doesn't fully explain the reason for this. Any contact phones, are only for people ages 18 or over. Thus, teenagers don't have the ability to pay using this method.

There is a lack of analysis from the student, as the report states 'All these things are mainly used by teenagers, as it is normal for them'. This is quite a weak sentence and is in-correct. The report could include 'A number of people within the UK, use a number of other feature's on a mobile phone, such as listing to music and browsing the internet. This is due to that recent technology has made this possible using WiFi connections across the UK.' The report mentions how there's an issue over language barriers, and some people may not be able to read/listen to content on-line due to the language issue. However the report hasn't mention why this is an issue. The main reason is that the majority of internet pages are written in English, and people who do not understand English will find this difficult to read. There isn't any mention to why there find the language difficult within the report.

The writing style is quite informal, and there's a number of spelling/grammar errors which should be corrected within the report. For example one paragraph starts with 'people use a mobile phone', however the 'p' should be a capital 'P'.