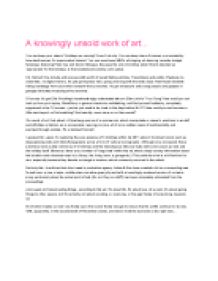 ﻿A knowingly unsold work of art... You can keep your classic "Holidays are coming" Coca-Cola clip. You can keep Jason Donovan, surrounded by tone-deaf women, for supermarket Iceland. You can even keep M&S's all-singing, all-dancing, monster-budget fandango, featuring Peter Kay and Dannii Minogue. Because the only Christmas advert that is deemed as ?appropriate? for the holidays, is that created and aired by John Lewis. Oh, that ad! One minute and one second's worth of purest festive whimsy. Pared down and pretty; it features no celebrities, no digital trickery. It's just got hapless men, going all wrong with the sticky tape; fresh-faced students hiding handbags from each other beneath library benches. ...read more.

How could you not become a little moist-eyed, on first watching? And weirdly, even more so on the second? It's a work of art, that advert. A Spielberg version of a commercial, which manipulates a viewer's emotions in as deft and effortless a fashion as is conceivable, leaving you (me, all of us) a sodden mess of sentimentality and warmed-through-cockles. It's a damned triumph! I applaud Mr. Lewis, for capturing the pure essence of Christmas within his 2011 advert. Dominant colors such as deep-glowing reds and intensifying greens act as a form of ?cultural iconography?. ...read more.

simple, middle-class narrative goes jolly well with a hauntingly rendered version of a classic song; particularly when the actual point of ads (Go on! Buy our stuff!) has been completely eliminated from the proceedings. John Lewis isn't about selling things, according to this ad. It's about life. It's about love. At a push, it's about giving things to other people, but it's certainly not about coveting, or receiving, or the ugly frenzy of consuming, heavens no! All of which makes us look very fondly upon the brand; fondly enough to ensure that its profits continue to rise (by 10%, apparently, in the second week of November alone), and never mind the economic crisis right now? ...read more.