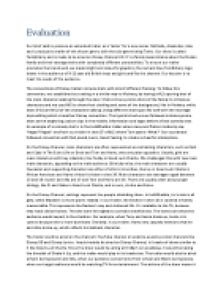 CA3 Evaluation. Our brief said to produce an extended trailer as a taster for a new series.

﻿Evaluation Our brief said to produce an extended trailer as a ?taster? for a new series. Nathalie, Alexander, Alex and I produced a trailer of the sitcom genre, with the sub-genre being Twins. Our show is called Tom&Harry and is made to be aired on Disney Channel UK. It?s a family based drama about the Noden family and their teenage twins with completely different personalities. To ensure our trailer promotes the brand well, we made bright and colourful graphics; the red and blue Tom&Harry logo draws in the audience of 9-12 year old British boys and girls and fits the channel. Our key aim is to meet the needs of the audience. The conventions of Disney trailers include shots with lots of different framing. To follow this convention, we established our setting in a similar way to Violetta; by having a VLS opening shot of the main character waking through the door. Shots 2-8 are promo shots of the family to introduce characters and we used MS to show their clothing and some of the background, like in Violetta, while shots 9-10 are MCU of the characters talking. ...read more.

Main characters are teenagers aged between 13 and 18: Austin and Ally are 17 and Tom and Harry are 15. There are usually older and younger siblings, like PJ and Gabe in Good Luck Charlie, and in ours, Archie and Esme. On the Disney Channel, settings represent the people inhabiting them. In Liv&Maddie, Liv?s side is all girly, while Maddie?s is more sports related. In our trailer, the kitchen in shot 16 is covered in family memorabilia. This represents the Nodens? cosy and cluttered life. It?s relatable to the TA, because they have similar homes. The sets were lit brightly to connote cheerfulness. The events are what the audience would expect in the situation. For example, when Tony and Jessie break up, Jessie is in control because she is more dominant. Similarly, in our trailer, Harry very casually mentions that he and Alice broke up, which reflects his laidback character. The trailer could be aired on the channel?s YouTube channel or website as well as sister channels like Disney XD and Disney Junior. ...read more.

Tom and Harry fight in shot 14 and 16, but in quite a controlled way that obeys the code. We were good at making sure we had no offensive language. Our trailer appeals to the younger males in our audience because they aspire to be like Harry due to his sporty nature. Older boys may aspire to be like Tom because of his ?hipster-esque? nature. From our feedback, we found that older boys ?like the relationship between the twins?. Younger females aspired to be like Esme with one viewer calling her ?funny and interesting?. Something we could improve is having an aspirational character for older girls to aspire to. It?s appealing to British children because of the familiarity and accent. This relates to the personal identity part of the uses and gratification theory. The graphics were clear and conveyed the information well. I agree with the feedback that there could have been more slapstick comedy to fit with the sitcom genre, as well as more one-liners. I was really pleased that I achieved my aims, and we produced a trailer that was appropriate for the audience, channel and sitcom genre. ...read more.