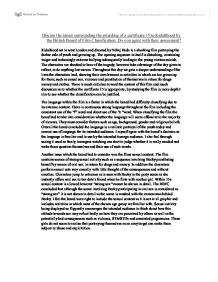 Discuss the issues surrounding the awarding of a certificate 15 to Kidulthood by the British Board of Film Classification. Do you agree with their assessment?

Discuss the issues surrounding the awarding of a certificate 15 to Kidulthood by the British Board of Film Classification. Do you agree with their assessment? Kidulthood set in west London and directed by Nehaj Hada is a shocking film portraying the darker side of youth and growing up. The opening sequence in itself is disturbing, containing vulgar and sickeningly extreme bullying subsequently leading to the young victims suicide. The characters are shocked to hear of the tragedy, however take advantage of the day given to reflect, to do anything but mourn. Throughout this day we gain a deeper understanding of the lives the characters lead, showing their involvement in activities in which are too grown up for them; such as casual sex, violence and prostitution of themselves in return for drugs money and clothes. There is much criticism toward the content of this film and much discussion as to whether the certificate 15 is appropriate; by studying the film in more depth I aim to see whether the classification can be justified. The language within the film is a factor in which the board had difficulty classifying due to its extreme content. ...read more.

Characters jump to extremes as is seen with Becky in the party scene as she instantly offers anal sex to her date's friend when he flirts with another girl. Within 15s sexual content is allowed however "strong sex "cannot be shown in detail. The BBFC concluded that although the scene involving Becky participating in oral sex is considered as "strong sex" it is not shown in detail as the scene is masked with the cameraman behind Becky. I feel the board were right to include the sexual content as it is not at all graphic and includes activities in which most of the chosen age group are familiar with. Sexual activity being displayed so flippantly encourages the intended audience to think about how this attitude towards sex may reflect badly on how they are perceived by others as well as the potentially bad consequences such as violence, STIs/STDs and unwanted pregnancies. These girls do not seem to realise that portraying themselves as an easy target can make them subject to abuse and exploitation. The board were concerned by the use of drugs within the film, for example there are many scenes within it containing the use of class A drugs such as snorting cocaine. ...read more.

We see the effect it has on Trife and as an audience we do not perceive a sense of achievement or pride in his action but more of disgust of himself. Keeping this extreme use of violence within the film helps people to consider their actions and its consequences. Overall I agree with the board's classification of 15, as I feel the film is less about the content and more about its educational value to young people. It encourages them to reflect on their own life, thus by comparing it to the dramatics of this film gain a better perspective of the consequences of a similar lifestyle. These consequences of certain actions throughout the film unless misinterpreted do not glamorise them but make them appear sleazy, pitiable and disgraceful. I feel the issues that concerned the board are all those which need to be seen and the people of the selected age group are familiar with. Overall the film portrays a specific type of lifestyle in a way that is not appealing and encourages the selected audience to be aware of the consequences which come with certain decisions. ...read more.