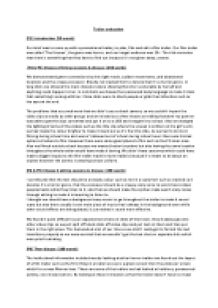 Our film trailer was called The Unseen, the genre was horror, and our target audience was 15+.

﻿Trailer evaluation (P1) Introduction (50 words) Our brief was to come up with a promotional trailer; to plan, film and edit a film trailer. Our film trailer was called ?The Unseen?, the genre was horror, and our target audience was 15+. The title connotes that there?s something that they have to find out because it?s not given away, unseen. (P2 & P3) Choose 2 filming sessions & discuss: (250 words) We demonstrated genre convections by the night mode, sudden movements, and abandoned locations and the creepy voiceover. Bloody red cracked font to denote that it?s a horror genre. In long shots we showed the main character alone showing that she?s vulnerable by herself and anything could happen to her. In mid shots we showed her possessed body language to make it clear that something?s wrong with her. Close shots were to shock people or grab their attention such as the eyes at the end. The problems that occurred were that we didn?t use a school camera, so we couldn?t import the video clips as easily as ...read more.

(P4 & P5) Choose 2 editing sessions & discuss: (250 words) I contributed that the text should be a bloody colour such as red in a scary font such as cracked so it denotes it?s a horror genre, that the voiceover should be a creepy scary voice to send shivers down peoples backs while they listen to it, also that we should make the orphan make weird scary noises through editing to make it interesting to listen to. I thought we should have a background scary music to go throughout the trailer to make it sound scary but also there usually is one main piece of music that?s always in the background even while other sound effects are being played, it just makes it sound more effective. We found it quite difficult to put separate text shots on shots of their own, they?d always go onto other video clips so we just spilt off black shots off video clips and put text on them and then put them in the right place. ...read more.

The trailer will be exhibited on Halloween as it?s a horror film. It?ll be exhibited on TV, after popular programmes such as x factor as a large amount of the target audience may watch it and in cinemas, people who often go to cinemas will see it and may come back to see it another day and on buses because this means lots of people will be able to see it; the more people see it, the more they would want to watch it. (P7) Conclusion (50 words) We should have used costume, this would have increased the verisimilitude of the trailer, made it feel more real because the girl is meant to be an orphan but she doesn?t look like an orphan, the clothes don?t denote that she?s an orphan. The narrative isn?t as clear as we wanted it, however it?s good because it shows that this orphan is mad/possessed but it doesn?t show why, it?s unseen. The different variety of camera shots used was very good, we got each different type of shot and it fitted into our trailer perfectly. The music was quite diegetic it fitted into the scenes perfectly. ...read more.