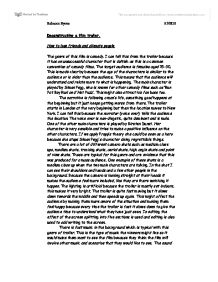 Deconstructing a film trailer. How to lose friends and alienate people The genre of this film is comedy. I can tell this from the trailer because it has an unsuccessful character that is doltish as this is a common convention of comedy films. The target audience is females aged 15-30. This is made clear by because the age of the characters is similar to the audience or is older than the audience. This means that the audience will understand and relate more to what is happening. The main character is played by Simon Pegg, who is known for other comedy films such as 'Run Fat Boy Run' and 'Hot Fuzz'. This might also attract his fan base too. The narrative is following a man's life, something good happens at the beginning but it just keeps getting worse from there. ...read more.

In the shot I can see their shoulders and heads and a few other people in the background. Because the camera is looking straight at their heads it makes the audience feel more included, like they are there watching it happen. The lighting is artificial because the trailer is mostly set indoors, this makes it very bright. The trailer is quite fast moving but it slows down towards the middle and then speeds up again. This might affect the audience by making them more aware of the situation and making them feel happy because every time the trailer is fast it slows down to give the audience time to understand what they have just seen. In editing the effect of the screen splitting into five sections is used and editing is also used to add writing to the screen. ...read more.

There are also glasses used which makes the character appear more professional so that when they do funny things it will affect the audience more because they are less likely to expect it. The trailer makes the audience want to go and see the film by putting funny parts in it. This is affective because it leaves the audience wanting more but at the same time satisfied by what they have seen. By making the trailer funny, by including shots such as when Simon Pegg gets kicked in the shin, it automatically makes the audience aware that it is a comedy. People who have seen other films with Simon Pegg in or films like 'Good luck Chuck' and films staring Adam Sandler would also like this film. The trailer makes this clear by clearly stating that Simon Pegg plays the main character and staring other famous actors that are in a lot of other films both comedy and otherwise. ?? ?? ?? ?? Rebecca Byrne E10KH ...read more.