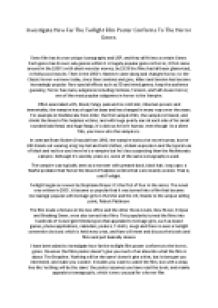 Investigate How Far The Twilight Film Poster Conforms To The Horror Genre.

﻿Investigate How Far The Twilight Film Poster Conforms To The Horror Genre. Every film has its own unique Iconography and USP, and they all fit into a certain Genre. Each genre has its own sub-genres within it. A hugely popular genre is Horror, it first came around in the 1890?s with silent monster movies, by 1933 the films had all been glamorised, in Hollywood movies. Then in the 1960?s Hammer came along and changed horror, to the Classic Horror we know today, since then zombies and gore, killers and tension has become increasingly popular. Now special effects such as 3D and mind games, keep the audience guessing. Horror has many subgenres including Zombies, Tension, and Self-Aware horror; one of the most popular subgenres in horror is the Vampire. Often associated with, blood, fangs, pale and ice cold skin, inhuman powers and immortality, the vampire has a huge fan base and has changed in many ways over the years. For example in Nosfeteratu from 1922, the first vampire film, the vampire is feared, and drinks the blood of his helpless victims, and with huge pointy ears at each ...read more.

However the films poster doesn?t give you much of an idea into what the film is about. The Strapline, ?Nothing will be the same? doesn?t give a hint, but it does get you interested, and make you wonder. It makes you want to watch the film, but with a strap line like ?nothing will be the same? the poster assumes you have read the book, and mainly appeals to teenage girls, which is very unusual for a horror film. Apart from the black background and sinister looks on the faces of the people shown on the poster, none of the poster?s features are similar to one advertising a horror film, where as film posters for the likes of Texas Chainsaw Massacre and Dracula both include Blood and Gore, typical mise-en scene for a horror film. Compared to typical vampire films, this poster doesn?t show any blood or even red! The Film?s title, release dates and Strapline are all in white with a shiny look to it, I think this is because in Twilight when a vampire is exposed to sunlight, they sparkle, which is different from other vampire films as their typical mise-en scene is that when exposed to sunlight the vampire dies. ...read more.

But, he isn?t the kind of USP you?d expect for a horror film and neither is the target audience. Edward looks like he is protecting Bella because he loves her, which suggests that the films genre is less horror and more gothic novel style romance, because vampires usually prey on the helpless woman not love them, they drink their blood, not kiss them. The film is rated at a 12A, which like a lot of the films aspects, is very unusual for the horror genre. Horror films are usually rated at an 18, or at least a 15. The vampires in twilight don?t have fangs and they sparkle in sunlight and some of them don?t even drink human blood, so a lot of the main iconography and Mise-en scene is missing, the ones that make a vampire film, horror, that make the vampire feared. The twilight film poster does conform to the horror genre, in some ways, like the vampire rivalry shown between the two groups of people in the background and foreground and body language being used is fearful, and scary. But in my opinion, the twilight film poster doesn?t conform into the horror genre very far, but more of a romance in a gothic style. ...read more.