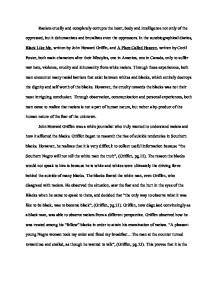 Racism cruelly and completely corrupts the heart, body and intelligence not only of the oppressed, but it dehumanizes and brutalizes even the oppressors. In the autobiographical diaries, Black Like Me, written by John Howard Griffin, and A Place Called Heaven, written by Cecil Foster, both main characters alter their lifestyles, one in America, one in Canada, only to suffer raw hate, violence, crudity and inhumanity from white racists. Through these experiences, both men encounter many racial barriers that exist between whites and blacks, which entirely destroys the dignity and self worth of the blacks. However, the cruelty towards the blacks was not their most intriguing conclusion. Through observation, communication and personal experiences, both men came to realize that racism is not a part of human nature, but rather a by-product of the human nature of the fear of the unknown. John Howard Griffen was a white journalist who truly wanted to understand racism and how it affected the blacks. Griffen began to research the rise of suicide tendencies in Southern blacks. However, he realizes that it is very difficult to collect useful information because "the Southern Negro will not tell the white man the truth", (Griffen, pg.12). ...read more.

I don't know what to think anymore. I think they are just scared for me for some reason. But I know I am just as safe in this classroom than anywhere else, but I can't help but feel a little frightened because what if they are right?" (Foster, pg. 119). This proves to Foster that people are not born with hatred, it is learned. Racism is not part of human nature, it is taught. The white people were not educated on the blacks because they chose not to surround themselves with them. They were afraid that the blacks were there to cause trouble and danger to society. It is not until they began to put their fears aside and question the stereotypes, that the white folk began to see that there is no need to dread the blacks. The only way either of these main characters could come to such realizations was through their conversations and interactions with the white people who were willing to talk to them. Some conversations that Griffen participated in, that made man's fear of each other even more evident, occurred when he was forced to hitch-hike with several anonymous drivers. ...read more.