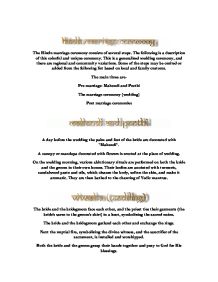 The Hindu marriage ceremony consists of several steps. The following is a description of this colorful and unique ceremony. This is a generalized wedding ceremony, and there are regional and community variations. Some of the steps may be omited or added from the following list based on local and family customs. The main three are- Pre marriage- Mahendi and Peethi The marriage ceremony (wedding) ...read more.

Their bodies are anointed with turmeric, sandalwood paste and oils, which cleanse the body, soften the skin, and make it aromatic. They are then bathed to the chanting of Vedic mantras. The bride and the bridegroom face each other, and the priest ties their garments (the bride's saree to the groom's shirt) in a knot, symbolizing the sacred union. The bride and the bridegroom garland each other and exchange the rings. ...read more.

The couple depart from the girl's house after the vidai , for the groom's house. They carry behind the couple the sacred fire in a vessel. They should keep the re constantly alight. When they reach his house, he says: "Enter with your right foot. Do not remain outside." The bride enters the home placing the right foot - considered auspicious, first. When the bride and the groom enter the groom's house, the mother of the groom welcomes the bride by doing an aarati. They sit in silence until the stars are visible. ...read more.