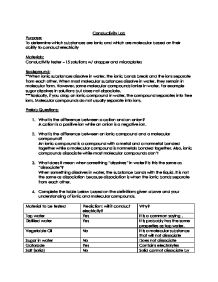 Conductivity Lab. Purpose: To determine which substances are ionic and which are molecular based on their ability to conduct electricity

This is a good account of conductivity. It contains a well through out experiment to confirm whether a broad range of materials conduct. The report does not go into much detail about why certain things do or do not conduct.

The candidate has carried out a well-planned experiment to investigate the conductivity of different substances. They made hypothesis, and then measured the conductivity of each substance to prove or disprove their hypothesis.
Their report doesn't explicitly give a conclusion, but instead has a 'digesting the data' section (a better word would be 'analysis'!) which leaves the reader to refer back to their hypothesis to discover their conclusion. Although they have investigated the question well, they have failed to fully answer it in a well-balanced conclusion.
is very good.
3*

When making their hypothesis, the candidate failed to think logically about the structure of the substances, which meant that their hypotheses were unsupported and sometimes incorrect - for example claiming that distilled water would conduct because 'it probably has the same properties as tap water' - tap water apparently conducted because 'it is a common saying'. hypothesis need balanced scientific reasoning. however, they have used a more logical explanation of the properties of the substances when analysing their results - this section is fairly well written and detailed. However, they could improve by explicitly stating that dissociation is the breaking of an ionic bond, which allows the ions to be dissolved into the solution and so conduct electricity (they could also have discussed that the dissociation is caused by the attraction of the ions to the water molecules). They have, however, implied this several times, particularly when analysing the differences between ionic solids and solutions.
They have also analysed how well they carried out their experiment, but looking at causes of uncertainties and how these would have affected the results - this explanation is particularly good. They could have developed this section further if they had repeated their experiment - by finding the mean of the data, as well as identifying outliers. Despite this, their analysis is very good.

Their spelling and grammar is generally very good. However, there is room for improvement in the layout of the report - particularly in their choice of subtitles. The subtitles 'Data table' is particularly misleading, as it implies that it has been sound from another source. It would have been better to use the subtitle 'results'. This section should also have been placed after the description of the method (which needs a labelled diagram). A major problem is the lack of a conclusion - the candidate has left it up to the reader to look at their analysis of results (the conclusion is 'hidden' within the analysis section). It is very important to have a separately headed conclusion section for clarity. Despite these issues, they have described their reasoning very well and precisely, which is very good.