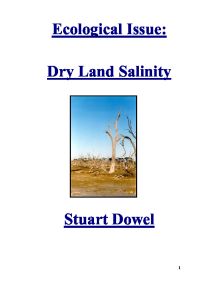 Ecological Issue:Dry Land Salinity - What is it?

Ecological Issue: Dry Land Salinity Stuart Dowel What is it? There are two kinds of salinity - dryland and irrigation salinity. Both are about water management and maintaining the right balance or equilibrium. In Western Australia, they are affected mostly by dryland salinity, while in Victoria we are mainly affected by dryland salinity too. Dryland salinity occurs when salt stored in the soil profile over thousands of years is brought to the surface or close to the surface by rising groundwater levels. The extent and seriousness of salinity and in an area depends on land use, vegetation, geology, soils, climate, and salt sources. Each of these factors affects the rate of recharge, which therefore influences the rate of discharge. Recharge is the term used when soil pores are full, causing excess water to pass into groundwater. The term discharge refers to water leaving the groundwater system as flow to streams and rivers or as seepage or springs at the soil surface. As long as the salt stays deep in the soil, it poses no problems - at this stage it is referred to as primary salinity. However changes have occurred on our land that's bringing the salt closer to the surface where it can cause major problems, hence causing the natural water balance to be disturbed. ...read more.

it becomes subject to dispersion (breaking up into smaller particles) therefore been unstable and can be easily eroded by water. The quality of water becomes greatly affected due to the increase amount of salt. More than one-third (36%) of the south-west's surface water resource (suitable for domestic, agricultural or some industrial use) has become salty or saline and can no longer be used. A further 16 per cent is of marginal quality i.e. marginally better still salty. There is also a loss of native aquatic habitat as there ecosystem becomes to saline forcing the organisms to move to another are if possible or die off. The effect on biodiversity is huge as without intervention, 450 plant species endemic to the south-west agricultural region will become extinct and three-quarters of the region's waterbird species will severely decline (this figure is for western Australia). What are we doing about it? There is a general understanding about the causes of salinity in most parts of Victoria. However actual specifics will vary from site to site. Gaining an understanding of a specific problem can involve long periods of monitoring before any ground water trends can be predicted. We can do a lot to diminish or limit salinity, however realistically; it is probably unfeasible and not possible, to revitalise the land that is already saline. ...read more.

Groundwater monitoring includes: * Conducting aerial surveys. * Using satellite imagery to monitor the extent of salt affected land, areas at danger or threat of salinity. * Measuring the height of groundwater in bores. Water quality testing involves: Measuring the salinity levels in waterways or groundwater, through measuring the electrical conductivity of the water Cost of Salinity: The cost and affect of salinity in the agriculture industry and community is of huge proportions. The agricultural zone of south-west Western Australia has the largest areas of dryland salinity in Australia. In the south west, 1.8 million hectares in the agricultural region are already affected by salinity to some extent. In the northern and central areas of Victoria alone, there has been an estimated cost of $30.6 million spent on the affects of salinity. The bulk of this cost is due to maintenance of land, preventive measures, plans to rehabilitate etc. Local governments incur a cost of $3.28 million per annum due the affects and presence of dryland salinity. It is estimated that current costs include $130 million annually in lost agricultural production; $100 million annually in damage to infrastructure; and at least $40 million in loss of environmental assets.� (Figures, from CSIRO�). In, towns, salt can damage roads, buildings, rail embankments and other infrastructure. It can be a very expensive problem! The overall cost of dryland salinity is not really known but it is an extremely costly problem that needs to fixed or sustained. ...read more.