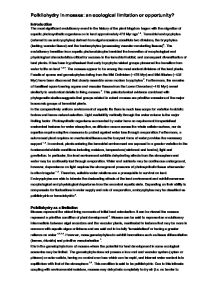 Poikilohydry in mosses: an ecological limitation or opportunity?

Poikilohydry in mosses: an ecological limitation or opportunity? Introduction The most significant evolutionary event in the history of the plant kingdom began with the migration of aquatic photosynthetic organisms on to land approximately 475 Myr ago 1,2. Terrestrial embryophytes (referred to as embryophytes) derived from algal ancestors constitute two divisions, the bryophytes (lacking vascular tissue) and the tracheophytes (possessing vascular conducting tissues) 2. The evolutionary transition from aquatic photoautotrophs heralded the innovation of morphological and physiological characteristics critical for success in the terrestrial habitat, and consequent diversification of land plants. It has been hypothesised that early bryophyte related groups pioneered the transition from water to life on land 1,2,4. The mosses appear to be among the most ancient divisions of the land plants. Fossils of spores and gametophytes dating from the Mid Ordivician (~476 Myr) and Mid Sliurian (~432 Myr) have been discovered that closely resemble some modern bryophytes 4. Furthermore, the remains of fossilised spore-bearing organs and vascular tissues from the Lower Devonian (~410 Myr) reveal similarity in anatomical details to living mosses 4. This paleobotanical evidence combined with phylogenetic studies suggests that groups related to extant mosses are primitive ancestors of the major taxonomic groups of terrestrial plants. ...read more.

Although the sporophyte is able prolong growth on account of the production of green tissue, it is still dependent on the gametophyte for water. In higher plants, by the development of the root to acquire water from subterranean sources, the sporophyte becomes truly independent 4,. In contrast to the level of developmental complexity present in mosses, it can be argued that homoiohydric characters exhibited in the tracheophytes; a lignified vascular system of xylem and phloem, an impermeable cuticle surrounding vegetative tissues, stomata and seed in higher tracheophytes are a higher state of plant organisation and the ultimate solution to the problem of adaptation to life on land, providing greater independence from water 5. The properties of vascular tissue allow the formation of a transport system conducting water and photosynthate around the multicellular body, thus allowing the development of large complex bodies of roots and leaves7. Additionally, lignified vascular tissue provides a means of mechanical support in large tracheophytes allowing for the erect habit, in contrast to the dorsiventrally flattened posture in mosses7. With an extensive root network, the homoiohydric system allows the maintenance of activity despite sudden changes in humidity as roots penetrate readily available subterranean sources of water i.e. ...read more.

However, it retained distinct polyribosome pools which increased with increasing hydration time3. This is in contrast to vascular plants where extreme water stress induces an irreversible degredation in polyribosome activity. In addition there is evidence to suggest that the activity of antioxidant enzymes is a response in mosses and other DT organisms to oxidative stress induced by desiccation11. Oxidative damage has been shown to be less in DT organisms such as Tortula than desiccation sensitive vascular plants12. In mosses there exists species specific differences in relation to their desiccation tolerance3. It has been observed that mosses characteristic of exposed habitats such as Tortula ruralis can recover rapidly after desiccation5. This may be an adaptation to maximise growth during a water regime that is transient. This is in contrast to forest-floor dwellers such as Rhytidiadelphus loreus where recovery of photosynthesis following drying takes several hours more5. There exists approximately 14000 species of moss exhibiting world-wide distribution and are able to grow luxuriantly in the humid climate of temperate and tropical regions.3 Fundamentally, mosses are able to persist in extreme conditions of arctic and alpine regions and can tolerate semi-arid conditions. Largely associated with their remarkable regeneration capacity, mosses exhibit great diversity in the ecological conditions in which they can pervade, proving in particular habitats to be the adaptively optimum plant organism. ...read more.