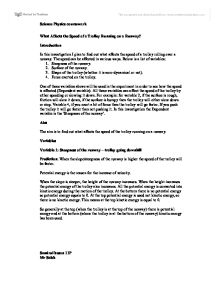 What Affects the Speed of a Trolley Running on a Runway?

In this investigation I plan to find out what affects the speed of a trolley rolling over a runway. The speed can be affected in various ways. Below is a list of variables:

One of these variables above will be used in the experiment in order to see how the speed is affected (Dependant variable). All these variables can affect the speed of the trolley by either speeding or slowing it down. For example: for variable 2, if the surface is rough, friction will slow it down, if the surface is bumpy then the trolley will either slow down or stop. Variable 4, if you exert a bit of force then the trolley will go faster. If you push the trolley it will go faster than not pushing it. In this investigation the Dependant variable is the ‘Steepness of the runway’.

The aim is to find out what affects the speed of the trolley running on a runway.

Prediction: When the slope/steepness of the runway is higher the speed of the trolley will be faster.

Potential energy is the reason for the increase of velocity.

When the slope is steeper, the height of the runway increases.

Prediction: More starting force will result in a higher velocity.

In this experiment we plan to find out what affects the speed of a trolley on a runway. The experiment will be carefully carried out, and the steepness will be changed. One end of the ramp will be in contact with the surface while the other end will be heightened. This is so we can make the ramp steeper. The heights used will be: 30cm; 35cm; 40cm; 45cm; and 50cm. The structure of the experiment is shown below:

The length of the ramp will be 2.38m and will not be changed. For safety I’ll ensure that everybody is at a distance from the experiment so there’ll be no accidental injuries.

In order to keep a fair test I’ll make sure that:

1. Extend the ramp to expand my results and get more results which I can conclude on.

2. Also to expand the experiment include more variables and also do a preliminary test to see which is the best trolley to use for the actual experiment.

3. The ramp is cleaned with a cloth after each test so there is no dirt slowing the trolley as it travels down.

4. Also repeat the experiment more than three times for a better overall result. This would ensure reliability even more and again will help spot anomalous results.