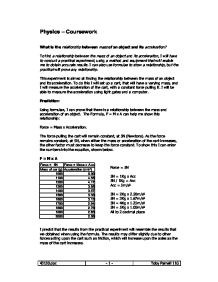 What is the relationship between mass of an object and its acceleration?

What is the relationship between mass of an object and its acceleration?

To find a relationship between the mass of an object and its acceleration, I will have to conduct a practical experiment, using a method and equipment that will enable me to obtain accurate results. I can also use formulae to show a relationship, but the practical will prove any relationship.

Using formulae, I can prove that there is a relationship between the mass and acceleration of an object.  The Formula, F = M x A can help me show this relationship:

The force pulling the cart will remain constant, at 5N (Newtons). As the force remains constant, at 5N, when either the mass or acceleration of the cart increases, the other factor must decrease to keep the force constant. To show this I can enter the numbers into the equation, shown below.

As the results from the trial run were not accurate enough to help us answer the question, we modified the method to gain this accuracy. During the trial run, we approximated the mass of the cart to 1000g. The exact mass of the cart during the final experiment is 850g; this is including the timing card and the plastecine used to hold it in place. The exact mass will help us gain a greater accuracy.

Overall the results we gained were very similar to what we had expected, as the shape of the graph we had predicted was achieved, although the results were not as accurate as we had expected, due to the reasons explained above. To get more accurate results I could have added more mass on at a time so that the results represented a greater reading of mass. This should help me to achieve better results. The results that we got were enough to answer the question, and looked like those from the prediction so we did not have to conduct the experiment more than three times. I think my prediction was correct in that the relationship between the mass of an object is inversely proportional to its acceleration.