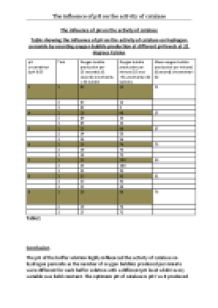 Bio practical - The influence of pH on the activity of catalase

to a viable temperature for the range of pH under investigation, so that it acts as a limiting factor on the activity of the catalase, this would in turn decrease the rate at which oxygen bubbles are produced and facilitate the counting of the oxygen bubbles, thus reducing random errors. 2. The counting of the number of the oxygen bubbles produced per 15 seconds does not provide a precise volume of oxygen produced and the sizes of the oxygen bubbles were not identical. This caused the experiment to be less representative as there was less precision and accuracy. 2.This problem could be solved if the method of collecting oxygen over water was used as shown in Fig1. The 10 potato discs for each pH,3cm³ of hydrogen peroxide and each buffer solution would be put in the reaction vessel and the oxygen would be collected in the measuring cylinder. The volume of oxygen collected would be the space created by the oxygen as it lowers the meniscus. ...read more.

This reduced the accuracy of the investigation as the volume of the substrate was not kept constant, for example, if more than 3cmá¶¾ of HâOâ was used for a specific pH value, there would be more bubbles produced as more of the HâOâ would be broken down into water and oxygen, thus giving false results. 5. This problem could be solved by pouring exactly 3cmá¶¾ of HâOâ in the beaker each time it is drawn up the syringe so that the volume of HâOâ collected is accurate and precise for each pH value. 6. There was no proof to the fact that the catalase was from the discs of potatoes. Therefore, this rendered the experiment less representative. 6. A control experiment would prove that the catalase emanated from the potatoes. This could be conducted by using any non-living thing like a marble, instead of using the potato discs, whilst keeping everything else constant. If no oxygen bubbles are produced, then the fact that catalase was from the potatoes would be confirmed. ...read more.