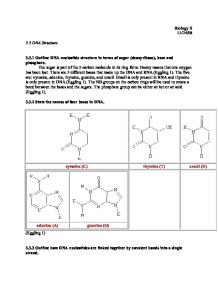 Biology II 11/24/08 3.3 DNA Structure 3.3.1 Outline DNA nucleotide structure in terms of sugar (deoxyribose), base and phosphate. The sugar is part of the 5-carbon molecule in its ring form. Deoxy means that one oxygen has been lost. There are 5 different bases that make up the DNA and RNA (Eggling 1). The five are: cytosine, adenine, thymine, guanine, and uracil. Uracil is only present in RNA and thymine is only present in DNA (Eggling 1). ...read more.

adenine (A) guanine (G) (Eggling 1) 3.3.3 Outline how DNA nucleotides are linked together by covalent bonds into a single strand. A nucleotide is a combination of a phosphate, a sugar, and a base. They are made up of the four bases stated in 3.3.2. Adenine and guanine are called purines and are made up of two carbon rings (Bowen 1). Cytosine and Thymine are called pyrimidines are consist of a single carbon ring (Bowen 1). ...read more.