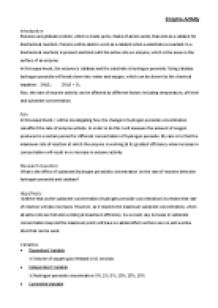 ﻿Enzyme Activity Introduction Enzymes are globular protein, which is made up by chains of amino acids, that acts as a catalyst for biochemical reaction. Enzyme will be able to work as a catalyst when a substrate (a reactant in a biochemical reaction) is present and bind with the active site on enzyme, which is the area on the surface of an enzyme. In this experiment, the enzyme is catalase and the substrate is hydrogen peroxide. Using catalase hydrogen peroxide will break down into water and oxygen, which can be shown by the chemical equation: 2H2O2 2H2O + O2 Also, the rate of enzyme activity can be affected by different factors including temperature, pH level and substrate concentration. Aim In this experiment, I will be investigating how the change in hydrogen peroxide concentration can affect the rate of enzyme activity. In order to do this I will measure the amount of oxygen produced in a certain period for different concentration of hydrogen peroxide. ...read more.