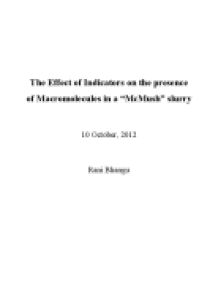 ﻿The Effect of Indicators on the presence of Macromolecules in a ?McMush? slurry 10 October, 2012 Rani Bhangu 1. The Effect of Indicators on the presence of macromolecules in a McMush 2. Design 1. Are carbohydrates, lipids, and proteins present in the McMush? 2. Introduction ?The organic compounds found in living organisms are lipids, carbohydrates, proteins, and nucleic acids. These macromolecules are large carbon-based structures. Common foods, which often consist of plant material or substances derived from animals, are combinations of these organic compounds. The macromolecules are assembled by joining several smaller units, called monomers, together through a chemical reaction called dehydration synthesis or condensation. The resulting polymer can be disassembled/ broken down into monomers through the complimentary process called hydrolysis? (Lazar, 1). Background Carbohydrates are made of carbon, hydrogen, and oxygen atoms (CHO). In the carbohydrate there are two hydrogen atoms for every one oxygen atom present. The monomers for carbohydrates are referred to as monosaccharides. When many monosaccharides are chained together the resulting molecule is called a polysaccharide. Carbohydrates are used by living organisms as an important source of energy. ...read more.

Since the positive and negative results were previously told, students had the opportunity to practice skills of determining results from chemical reactions. For example, for proteins, students were told gelatin would turn a blue-violet color when reacted with Biuret?s reagent, and that this meant proteins were present in the substance. Students were then able to determine whether or not proteins were present in the McMush slurry; if the resulting color was similar to the gelatin solution that meant proteins were present. This same process was applied throughout the rest of the experiment, thus students were successfully able to practice their skills in determining chemical reactions in an experiment and which (if any) macromolecules are present. The data supports my hypothesis that the McMush results would be the same as the positive control, indicating it contains the specified macromolecule. Throughout all the experiments, water was the negative control. The other substance (gelatin solution, oil, etc.) were the positive controls. The McMush resulted in the same color after chemical reactions with the indicators as the positive substances? colors after the same chemical reaction. As seen in Table 4, the McMush resulted in the same blue-violet color as the gelatin solution did when chemically reacted with Biuret reagent. According to Madison.k.al12.us, my conclusions are accurate. ...read more.