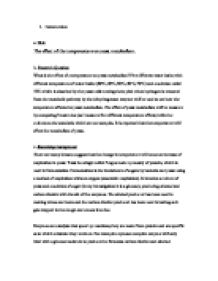 The effect of the tempereature on yeast metabolism.

1. Introduction: a. Title The effect of the tempereature on yeast metabolism. b. Research Question What is the effect of a temperature on yeast metabolism? Five different water baths with different temperature of water inside (30oC, 40oC, 50oC, 60oC, 70oC) and a solution called TTC which is absorbed by the yeast cells turning them pink when hydrogen is removed from the metabolic pathway by the dehydrogenase enzyme will be used to see how the temperature affects the yeast metabolism. The effect of yeast metabolism will be measure by comparing 5 test tubes (as I measure five different temperature effects) with the cultures to the standards which are our samples. It is expected that the temperature will affect the metabolism of yeast. c. Knowledge background There are many ideas to suggest that the change in temperature will cause an increase of respiration in yeast. Yeast is a single celled fungus made up mostly of protein, which is used in fermentation. Fermentation is the breakdown of sugars by bacteria and yeast using a method of respiration without oxygen (anaerobic respiration). It involves a culture of yeast and a solution of sugar (in my investigation it is a glucose), producing ethanol and carbon dioxide with the aid of the enzymes. The alcohol produced has been used in making wines and beers and the carbon dioxide produced has been used in baking as it gets trapped in the dough and causes it to rise. ...read more.

b. Method 1. Pipette 10cm3 glucose-yest culture into a clean test tube. 2. Into another tube place 10cm3 distilled water, use a measuring cylinder to measure the amount of distilled water. 3. In third test tube place 3cm3 of TTC, remember to use different pipette. 4. Incubate the tubes in a water bath at 30oC for 5 minutes, so the solution will have the same temperature as in water bath. 5. After equilibration place 1cm3 of TTC (from the tube you have already prepared and placed in water bath) into each solution (the solution with glucose-yest culture and with distilled water) 6. Shake or mix the solution in order to help activate the yeast. If it is improperly mixed, to temperature or activated, the results would not be fair and inaccurate. 7. Start the stop clock. 8. Compare the colour of the cultures to the standards every 5 minutes for 20 minutes and record percentage reduction. 9. Repeat the investigation at four more temperature: 40oC, 50oC, 60oC and 70oC 3. Data a. Data Table 1: A raw date table for the effect of temperature on the rate of respiration % in yeast cells Temperature/ oC �0.05 oC Student 30oC 40oC 50oC 60oC 70oC Recorded after time taken /minutes of being in water bath 5 minutes 10 minutes 15 minutes 20 minutes 25minutes 5 minutes 10 minutes 15 minutes 20 ...read more.

5. Discussion a. Evaluation The experiment follows the theories therefore any errors did not have a huge impact on the results. However, systematic errors could occur. For example, the thermometer was reading temperature of 52oC when it was actually 51.020C. This might have effect on calculated values. Also, the temperature in water bath cannot be always constant, sometimes it needs a heat up, or a cool up. To make sure, this would not happen again, the best way is use two thermometers as a control. Another error which could have slight effect on the results could be pH. Change in pH can have a dramatic effect on the rate of an enzyme-catalysed reaction. Each enzyme has a range of pH in which it functions efficiently. This is often at or close to neutrality point (pH 7.0) Also, instead of measuring the rate of reduction, we could measure using pH scale indicator to measure the number of hydrogen and gain more accurate results as well as controlling the changes in pH. However, it did not affect my results in the experiment and the overall trend in the curve supports the hypothesis. If I were to further investigate this experiment and my results, I would probably want to calculate the exact point where the enzymes begin to denature for respiration in yeast and use a pH indicator. 6. ...read more.