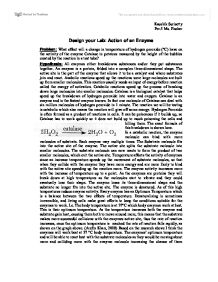 What effect will a change in temperature of hydrogen peroxide (C) have on the activity of the enzyme Catalase in potatoes measured by the height of the bubbles created by the reaction in a test tube?

Design your Lab: Action of an Enzyme Problem: What effect will a change in temperature of hydrogen peroxide (�C) have on the activity of the enzyme Catalase in potatoes measured by the height of the bubbles created by the reaction in a test tube? Hypothesis: All enzymes either breakdowns substances and\or they put substances together. An enzyme is a protein, folded into a complex three-dimensional shape. The active site is the part of the enzyme that allows it to be a catalyst and where substrates join and react. Anabolic reactions speed up the reactions were large molecules are built up from smaller molecules. This reaction usually needs an input of energy before reaction called the energy of activation. Catabolic reactions speed up the process of breaking down large molecules into smaller molecules. Catalase is a biological catalyst that helps speed up the breakdown of hydrogen peroxide into water and oxygen. Catalase is an enzyme and is the fastest enzyme known. In fact one molecule of Catalase can deal with six million molecules of hydrogen peroxide in 1 minute. The reaction we will be testing is catabolic which also means the reaction will give off some energy. Hydrogen Peroxide is often formed as a product of reactions in cells. It can be poisonous if it builds up, so Catalase has to work quickly so it does not build up to much poisoning the cells and killing them. ...read more.

* Knifes and cutlery * Ice * Cutting tile * Weighting scale * Weigh boat * gloves * goggles * lab coat * water * ruler * hot plate * 6 beakers * Graduated cylinder * Thermometer * Scoopula * Forceps Safety: Hydrogen peroxide is a toxic substance so handle with care and caution. Hot plate will be used to heat water, around these areas use caution. There will be a waste disposal breaker provide for solutions after reactions. Don't pour potato chunks or solution down the sink. Remember to wash equipment before and after each trail. Procedure: 1. Using a knife and other cutlery, cut 6 identical pieces of potato, and weigh each piece to be sure each of them are identical. Record the average weight of the pieces and the temperature of the potato and any qualitative observations. 2. Measure 5ml of hydrogen peroxide using the granulated cylinder and pour into each of the 6 test tube and place test tubes in the rack. Record the temperature of the hydrogen peroxide as this will be the starting point. Tape the height of the liquid in the test tube with a piece of tape. 3. Prepare water and \or ice bath in varying temperature in the 6 different beakers. 0�C, 10�C, 20�C, 30�C, 40�C, 50�C should be the approximate temperatures of the beakers. 4. Place one test tube in each of the water baths. ...read more.

The hypothesis was partially verified but falsified as the enzyme still increasing produced oxygen even after the inferred optimum temperature. In further experiments, the enzyme should be either heat or checked if in fact all the enzymes or the entire piece was in fact the same temperature as the manipulated temperature being tested. The background information relived on the enzyme being heat but in this experiment it was most likely shielded from the high heat in the cores of the potato samples. The samples of the potatoes were not identical and produced irregular results. Maybe if there was a machine where it could create identical pieces using automation but even if the size and shape were the same we can never be sure if the number of Catalase would be identical. A three digit scale could have been used. The samples could have been used as a liquid by crushing the potatoes or using a blender to ensure uniform samples. The experiment could have use a vacuum to collect the oxygen as the bubbles could have burst releasing oxygen and losing it form the system. The experiment should have been repeated 7 times or trails for accuracy but there was limited time and only individual work. Synthesis: The heating of the Substrate molecules instead (hydrogen peroxide) and this showed that with increasing temperatures of the substrate molecule the enzymes reacted quicker. This occurred because as the substrate molecules were heated they moved around more increasing the chance of them having a successful collision and reacting with the Catalase. ...read more.