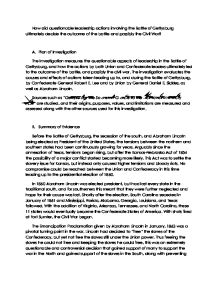 How did questionable leadership actions involving the Battle of Gettysburg ultimately decide the outcome of the battle and possibly the Civil War?

How did questionable leadership actions involving the Battle of Gettysburg ultimately decide the outcome of the battle and possibly the Civil War? A. Plan of Investigation The Investigation measures the questionable aspects of leadership in the Battle of Gettysburg, and how the actions by both Union and Confederate leaders ultimately led to the outcome of the battle, and possibly the civil war. The investigation evaluates the causes and effects of actions taken leading up to, and during the Battle of Gettysburg, by Confederate General Robert E. Lee and by Union by General Daniel E. Sickles, as well as Abraham Lincoln. Sources such as "Gettysburg: The Souvenir Guide to the National Military Park" are studied, and their origins, purposes, values, and limitations are measured and assessed along with the other sources used for this investigation. B. Summary of Evidence Before the Battle of Gettysburg, the secession of the south, and Abraham Lincoln being elected as President of the United States, the tensions between the northern and southern states had been continuously growing for years. Arguably since the annexation of Texas, tensions began rising, but after the Kansas-Nebraska Act of 1854 the possibility of a major conflict started becoming more likely. ...read more.

Lee demanding General Longstreet to send Pickett and his division straight into the center of the union defense, through a mile of open field on the third day of battle, marked the end for the Lee at Gettysburg. Pickett's division was dismantled and destroyed as they marched the battlefield, the few remaining survivors returned to Lee's position. Upon return General Lee asked Pickett to rally his division, and Pickett returned with the famous quote "General Lee, I have no division." C. Evaluation of Sources Gettysburg: The Souvenir Guide to the National Military Park is a 72 page account of the Battle of Gettysburg by James A. Gross and Andre B. Collins. The purpose of this guide is to accompany a visitor to the national park as they walk the fields of battle, and follows the battle in-depth in every aspect. The book has miniature biographies of Major Generals involved in the battle along with Abraham Lincoln. Also it gives a descriptive and illustrated battlefield tour, along with 20 different maps of Gettysburg over the three day span of the war. The maps illustrate the different positions of the Union and Confederate troops from the advancement of Lee's Army to the retreat, and the three days of battle in-between. ...read more.

The Battle of Gettysburg ended after three days in the Union's favor in large part due to Sickle's risky decision, and Lee sending his troops into a deathtrap. Of course the Battle of Gettysburg might not have occurred had it not been for the effects of the Emancipation Proclamation, because General Lee might not have needed to make a stand in the north if he had the support of foreign allies. Due to Lincoln though foreign aid backed away from the Confederacy and they were left weak. E. Conclusion Without the actions of Daniel E. Sickles and Robert E. Lee at Gettysburg the battle could have ended in a different manner. If the south had won the battle they would have gained a stronghold in the north and the outcome of the Civil War could be different. The Battle of Gettysburg is arguably the most pivotal turning point in the Civil War. Although the battle was nearly two years before the war officially ended, after the battle the Confederate army began retreating to the south. They never recovered from the losses in the north, and eventually the Confederate States of America officially lost the war and rejoined the Union as the United States of America. F. ...read more.