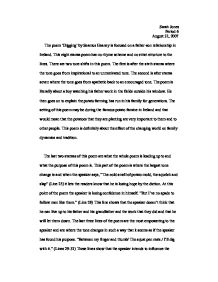 An Analysis of Digging

Sarah Jones Period 6 August 31, 2007 The poem 'Digging' by Seamus Heaney is focused on a father-son relationship in Ireland. This eight stanza poem has no rhyme scheme and no strict structure to the lines. There are two tone shifts in this poem. The first is after the sixth stanza where the tone goes from inspirational to an unmotivated tone. The second is after stanza seven where the tone goes from apathetic back to an encouraged tone. The poem is literally about a boy watching his father work in the fields outside his window. He then goes on to explain the potato farming has run in his family for generations. The setting of this poem may be during the famous potato famine in Ireland and that would mean that the potatoes that they are planting are very important to them and to other people. ...read more.

The last three lines of the poem are the most empowering to the speaker and are where the tone changes in such a way that it seems as if the speaker has found his purpose. "Between my finger and thumb/ The squat pen rests./ I'll dig with it." (Lines 29-31) These lines show that the speaker intends to influence the world with words instead of the way his father and grandfather affected people with their work. The speaker is saying that writing can be just as hard and as influential as what his ancestors did. The fifth and sixth stanzas are emphasizing how important the job of planting potatoes is to his family and how significant it is for him to continue doing it. The speaker looks up to his father for what he does and says, "By God, the old man could handle a spade,/ Just like his old man." ...read more.

When the speaker talks about writing he says, "The squat pen rests; as snug as a gun." (Line 2) I think that when use of the word "gun" foreshadows that his writing might not be welcome with his family. A lot of people find guns worthless and a waste of time. "When the spade sinks into gravelly ground :"(Line4) This predicts that difficult decision that the speaker has to make later in the poem, whether to do what his family wants or what he wants. Digging into the ground that is full of rocks is a hard job which is why I think that this line foretells of his choice. This poem, although literally describing the process of digging and planting potatoes also describes the relationship between a son that doesn't want to do what his father ants and a father that wants his son to continue his legacy. ...read more.