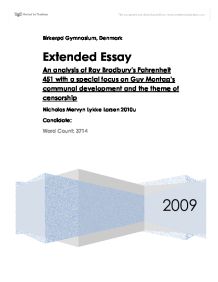 An analysis of Ray Bradbury's Fahrenheit 451

An analysis of Ray Bradbury's Fahrenheit 451 with a special focus on Guy Montag's communal development and the theme of censorship This essay will analyse Ray Bradbury's novel "Fahrenheit 451" with a main focus on the key character and the theme of censorship. Censorship is the cause of all actions in the story bound society, and is the main influence on the Guy Montag's personal development. As censorship constantly influences his lifestyle, he realizes what is wrong with the system and undergoes a change in his attitude towards his surroundings and standard of living. Analysing the effects of censorship and Montag's development we will closely follow the three stages of his progress; ignorance, doubt, rebellion. To do this we will follow from the beginning of his story, investigating his every action and state of affairs in the key events of his development. By the end of this essay we will have been through the whole development, revealing us the result of Guy Montag's progress and how he has handled his conflicts with censorship. We will analyse the factors and reasons to what made him revolt against the society, and analyse the actions and roles of the characters that have influenced the results of his achievements. Having done this we will be able to extract the message Ray Bradbury is sending to the public and the background for writing Fahrenheit 451. "Picture it. Nineteenth -century man with his horses, dogs, carts, slow motion. Then, in the twentieth century, speed up your camera. Books cut shorter. Condensations. Digests. Tabloids. Everything boils down to the gag, the snap ending. ... Classics cut to fit fifteen-minute radio shows, the cut again to fit two-minute book column, winding up at last as a ten- or twelve-dictionary r�sum�. Now at least you can read all the classics; keep up with your neighbours."1 The futuristic society in Fahrenheit 451 had developed having modernised largely between the two centuries as explained by Captain Beatty, causing that in the late twentieth century, articles were cut shorter, great novels were cut down and summarised into radio shows. ...read more.

Having called in sick for work, Captain Beatty visits Guy on his sick bed. Captain Beatty knows what firemen go through when they experience death the way Montag did, knowing that he is wondering why books have been censored and why firemen are burning them, so Beatty carefully explains how it all started in the first place. He describes how minorities were offended by what was written in literature, how the authors generalised all the small groups. "Authors, full of evil thoughts, lock up your typewriters. They did. ... Books, so the damned snobbish critics said, were dishwater. No wonder books stopped selling, the critics said."16 This meant the people only wanted their comic books and erotic magazines, so actually it was not the government that excluded books, but the people. "There was no dictum, no declaration, no censorship, to start with, no!"17 The firemen were just there to please the people's wish, there were no orders from the state. This passage can very easily confuse the reader in which opinion Captain Beatty has towards the development of the book censorship. It seems like he was an intellectual person, as he speaks foul about comic magazines and of the critics who ruined the reputation of books. But he also explains that the word "intellectual" became the swear word it deserved to be. Books were considered a loaded gun in the house next door; people were afraid of intellectual men and women, so the firemen were simply given the role of burning the books; Getting rid of the dangerous gun.18 He might have known that he too was a "dangerous gun" in the people's eyes, so he joined the revolution. Not only knowing what Montag feels, Beatty knows about his illegal affairs, so he tells Montag that there is a policy allowing firemen with stolen books to have 24 hours to deliver them for destruction. ...read more.

Readers have always presumed that the main theme of the book was state censorship, but Bradbury burst the bubble on that interpretation in a LA News interview in 2007. He had observed shortly after WWII that the people's growing interest in radio and television was spreading a long shadow over literature and the interest in books, "The culprit in Fahrenheit 451 is not the state - it is the people."24. He was predicting that mass media was going to be the end of literature. He was not just being pessimistic and old fashioned, when he foresaw that people would only be semi-informed by their "quick-reading" and "quick-radio broadcasts" giving the LA News readers the example; "Television gives you the dates of Napoleon, but not who he was" he calls TV's summarizing "factoids", being misinforming and imprecise. His true message to the readers is to watch out for the temptation of mass media, reading books is the only reliable form of information and knowledge25. Bradbury's message is especially apparent in the two texts Montag reads, "Dover Beach" and "The Book of Ecclesiastes". "Dover Beach" having the message "Challenges to the validity of long-standing theological and moral precepts have shaken the faith of people in God and religion" proving that human development and modernisation tends to lead the populace away from tradition and belief. These two texts can be compared in this way: Dover Beach = theology><religion and Fahrenheit 451 = Literature>< mass media. "The Book of Ecclesiastes" proclaims that "all action of man to be inherently meaningless/empty as the lives of both wise and foolish men end in death". The main speaker, "the son of David", claims wisdom as a means for a well-lived earthly life. This enforces Bradbury's message, proving that temporary happiness is insignificant, only knowledge is important.26 "Why live your life in the shade of unawareness, when generations of intellectuals share their precious awareness with you?"27 - Ray Bradbury. ...read more.