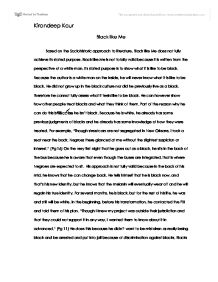 He tells himself that he is black now, and that's his new identity, but he knows that the melanin will eventually wear off and he will regain his true identity. For several months, he is black, but for the rest of his life, he was and still will be white. In the beginning, before his transformation, he contacted the FBI and told them of his plan. "Though I knew my project was outside their jurisdiction and that they could not support it in any way, I wanted them to know about it in advanced." (Pg 11) He does this because he didn't want to be mistaken as really being black and be arrested and put into jail because of discrimination against blacks. ...read more.

One of the problems with is the fact that he is a middle class man with money. Money is status. Regardless of gender or race, if you have money, you are respected. Because he does have money, he won't be treated the same as an average black. This also allows for error in his project. Overall, he has too many invalidities and errors for his stated purpose to be achieved. He can't show what it feels like to be black, but he can show how others treat blacks. One of the purposes of the Sociohistoric approach to literature however, is to show the vices of society. By showing the treatment of blacks by others and showing the discrimination against them, he is indeed exposing the vices of his society. ?? ?? ?? ?? Kirandeep Kaur ...read more.