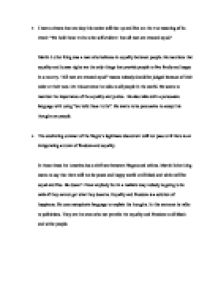 * I have a dream that one day this nation will rise up and live out the true meaning of its creed: "We hold these truths to be self-evident: that all men are created equal." Martin Luther King was a man who believes in equality between people. He mentions that equality and human rights are the only things that provide people to live freely and happy in a country. "All men are created equal" means nobody should be judged because of their color or their race. On this sentence he talks to all people in the world. He wants to mention the importance of the equality and justice. ...read more.

In this sentence he talks to politicians. They are the ones who can provide the equality and freedom to all black and white people. * This note was a promise that all men, yes, black men as well as white men, would be guaranteed the unalienable rights of life, liberty, and the pursuit of happiness. He talks about the "Constitution and the Declaration of Independence", when they sign this it means all people will be free and have right of living. However they were not really equal, happy and free in their own countries. Martin luther king says everybody will be happy either whites or blacks. ...read more.

* I have a dream that my four little children will one day live in a nation where they will not be judged by the color of their skin but by the content of their character. A persuasive speech includes some requirements to be effective. To affect a group of people, using children and their bad situation is one of the powerful way to be effective. Because children are known as innocent and the injustice about them cannot be acceptable. When people think about the children and their innocence, it would be very affective to make them do something. Martin Luther king uses this technique to affect people. Again, in this quote he talks to the politicians and nation, he wants to justice and a country where all people can live freely. ...read more.