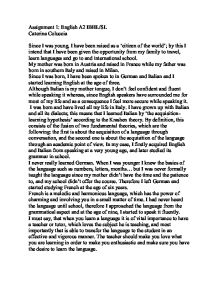 Assignment 1: English A2 IBHL/SL Caterina Coluccia Since I was young, I have been raised as a 'citizen of the world'; by this I intend that I have been given the opportunity from my family to travel, learn languages and go to and international school. My mother was born in Austria and raised in France while my father was born in southern Italy and raised in Milan. Since I was born, I have been spoken to in German and Italian and I started learning English at the age of three. Although Italian is my mother tongue, I don't feel confident and fluent while speaking it whereas, since English speakers have surrounded me for most of my life and as a consequence I feel more secure while speaking it. I was born and have lived all my life in Italy. I have grown up with Italian and all its dialects; this means that I learned Italian by 'the acquisition-learning hypothesis' according to the Krashen theory. ...read more.

At home, and outside the school premises I always speak Italian depending with who I am. The only exceptions would be a foreigner or a French or English friend with whom I would speak either English or French. I have been thorough all of my education in a British environment, at the Sir James Henderson British school of Milan and I have learned and I have slowly got closer to the habits of the English as well as their culture. I feel very close to that culture because I feel as if it is now part of my lifestyle. With the passing of time I have influence the people in my family and my friends with my 'Bi-culture'. An example could be the fact that my family has adopted the British accent when speaking English. In my life I have traveled very much for my parents work, but also for leisure. ...read more.

At present it is my second week into a completely new environment, and I feel very relaxed and happy, due to my flexibility. Although it is very hard to understand what American teachers say, due to they're accent, I am doing my best to adapt though I am keen on maintaining my British accent in order to take with me the part of my life which now belongs to my past. I am sure that this environment will broaden my experiences even more, and will give me the chance to experiment the approach on 'study' of another system. It must be said that I feel immensely closer to Britain than I do to the United States. In conclusion, I would like to underline that knowing three languages has been an advantage for me in many situations. I think that one of the most important things in life is to be able to mix with other cultures and being able to adapt to other lifestyles. This is why I chose the International Baccalaureate Diploma Programme. ...read more.