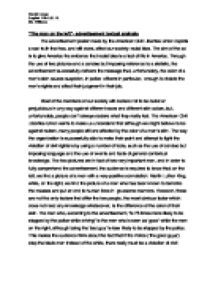 The man on the left- advertisement textual analysis The advertisement poster made by the American Civil Liberties Union depicts a sad truth that has, and still does, affect our society: racial bias.

"The man on the left"- advertisement textual analysis The advertisement poster made by the American Civil Liberties Union depicts a sad truth that has, and still does, affect our society: racial bias. The aim of the ad is to give America the evidence that racial bias is a fact of life in America. Through the use of two pictures and a concise but imposing reference to a statistic, the advertisement successfully delivers the message that, unfortunately, the color of a men's skin causes suspicion, in police officers in particular, enough to violate the men's rights and affect their judgment in their job. Most of the members of our society will declare not to be racist or prejudicious in any way against different races and different skin colors, but, unfortunately, people don't always declare what they really feel. The American Civil Liberties Union wants to make us understand that although we might believe to be against racism, many people still are affected by the color of a man's skin. The way the organization is successfully able to make their point and attempt to fight the violation of civil rights is by using a ...read more.

This makes the audience think about the fact that if the Police ('the good guys') stop the black men instead of the white, there really must be a violation of civil rights in the USA. Thanks to who the two men actually are, the ad is much more successful in conveying the message: if the two men shown in the ad were to be an unknown back men, and an unknown white men, the ad would have made a point, but it would not have had the impact it has by showing a 'good' black men and a 'bad' white men. The analyzed text adopts a conventional structural layout which has shown to be most successful: the Ogilvy method. Such method is very simple, but very effective; the basic Ogilvy ad layout consists in five main items: "-a very strong visual, either a photo or an illustration -a caption for the visual, if needed -a headline -well-written copy -a "signature" - logo and contact information for the product/company" We can perhaps find nearly all of these items in the ACLU advertisement against the violation of civil rights, moving from the top of the ...read more.

Such reference improves the credibility of the ad and makes the audience think even further, allowing the reader to realize and be convinced that the issue presented is real and presents a threat to modern society. At the very end of the page we find the name of the organization written in a very elegant and clear way, accompanied by the address and website of the organization in smaller character size underneath. I found the advertisement to be very successful in accomplishing it's aim of convincing members of western society that racism is an issue of great importance, and despite the common belief it is still a pressing issue which affects the life of people who get discriminated with no good reason everyday of their lives. Thanks to the use of conventional but effective structural conventions and relying on events known to have a strong impact on people, the advertisement has convinced me that the ACLU should be helped in it's attempt to fight the violation of civil rights. Daniel Longo English 11th L&L HL Ms. Williams Daniel Longo English 11th L&L HL Ms. Williams ...read more.