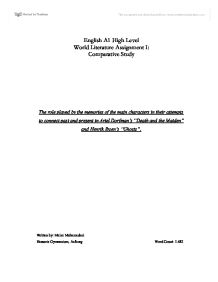 World Lit. - Comparative analysis: Death and The Maiden and Ghosts

(Death and the Maiden, p. 54) Even though they are trying to, both Gerardo and Paulina seem to be inadequate to move forward. They are both struggling with the issue of how exactly to deal with their past, and as a result their marriage is falling apart. They need to stop reliving the past and, like the society of which they are a part, and find a productive way to move forward. Similarly in Henrik Ibsen's play Ghosts there are layers of characterization, complicated by the presence of events that occurred to the characters years before the time where the play's plot is unfolded. The play focuses on the ways in which people and events that are long gone continue to resonate, and how they stay alive from one generation to the next. Ghosts is the story of a woman, Mrs. Alving, who is preparing for the opening of an orphanage in memory of her husband, Captain Alving, on the tenth anniversary of his death. The captain was an important and respected man in his community, and Mrs. Alving plans to raise this great memorial to him so that she will never have to ever speak of him again. ...read more.

In her attempt to follow the "path of duty" (Ghosts, p. 21) Mrs Alving covers up the truth with mistaken ideals. She tries to make the past disappear, as she builds an Orphanage in Captain Alving's memory, to dispel any rumours of his dissolute life. Her goal is to "feel as if [her] late husband had never lived in [the] house" (Ghosts, p. 25). However, her cowardish attitude towards the truth of the past ultimately ruins not only her own life, but also the lives of the people around her7. By unfolding to the reader the memories of their main characters' pasts, Dorfman and Ibsen stress the importance of the connection between past and present. The protagonists of their stories try to escape their past either by denying or suppressing it - but in the end this proofs to have fatal consequences. Neither seems to be able to put aside their memories and forget their past, but instead it keeps haunting them like "ghosts". In these two cases the saying "nothing improves the memory more than trying to forget"8 seems to be correct, indeed. In trying to forget their past they instead end up reliving it all over again. Dorfman and Ibsen in their respective plays both nurture the idea, that sometimes accepting the fact that it is impossible to change what happened in one's past is enough to move on. ...read more.