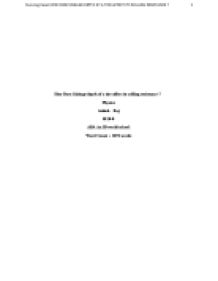 How does the sinkage depth of a tyre affect its rolling resistance ?

Running Head HOW DOES SINKAGE DEPTH OF A TIRE AFFECT ITS ROLLING RESISTANCE ?

How Does Sinkage depth of a tire affect its rolling resistance ?

The exploration is a laboratory experiment intended to explore relationship between rolling resistance of a tire and its sinkage depth .

The research question that was established from the introduction  is How does the sinkage depth of a tire affects the rolling resistance the tire faces ?

The modus operandi of this exploration involved allowing a bicycle with training wheels to roll down a slope inclined 45° into a smoothened sand bed. The sinkage depth of the tires on the sand that rolled on the sand bed was recorded . The tires of the bicycle had the radius of 27 cm and the width of the tire was 4cm. The range of the air pressure that were tested on the tire varied from  0 kPa to 196.16 kPa . The trials that were conducted varied on a value of 49.08 kPa . Using these values of sinkage depth obtained from the air pressure the rolling resistance for the tire was calculated.

Crr or the rolling resistance force for a pneuamatic tire can be defined by the equation ( Hibbeler, R.C. 2007)

The experimental rolling resistance is defined in the equation below

In the equation above where b is the rolling resistance coefficient , z is the sinkage depth and d is the diameter of the wheel .

IN the experimental frictional force equation above the frictional force Frr is the function of the normal force N required to push the wheel forward . Other variables such as the sinkage depth , radius and diameter will be defined variables of the tire based on the air pressure in the tire.

The method of investigation was designed in a way to reduce the possibilities of errors to its lowest potential while at the same time keeping in mind the attainment of highest accuracy of the results . The method involved allowing a bicycle with training wheels to roll down an inclined ramp 45° to a smoothened softened sand bed. On the trail of sand bed approximately 750cm3 of tap water had been added to reduce the elasticity of the sand and to make sure that the sand retains the tire tracks after the bicycle was dragged though the sand.

The air pressure of the tires that were used on a trial varied from 0kPa to 246 kPa with an interval of 49kPA in each trial which was measured by an analogue air pressure gauge.

The experiment was performed on in the outdoors during the day . The heat of sunlight was transferred to these materials used in the experiment , but since these materials have different thermal absorption capacitates their temperature might have varied. an abrupt increase in temperature induces a transient friction response similar to that induced by a step decrease in velocity ( Chester , 2012 ) . Since sand has a higher thermal capacity than wood the change in the temperature might cause a discrepancy . in order to control this variable we could have performed the experiment indoors with the temperature controlled by an air conditioner at 25ᵒC .