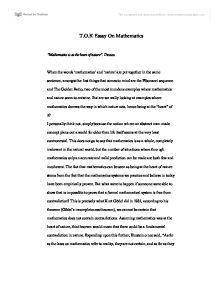 Mathematics is at the heart of nature. Discuss.

T.O.K Essay On Mathematics "Mathematics is at the heart of nature". Discuss. When the words 'mathematics' and 'nature' are put together in the same sentence, amongst the first things that comes to mind are the Fibonacci sequence and The Golden Ratio, two of the most mundane examples where mathematics and nature seem to entwine. But are we really looking at examples where mathematics decrees the way in which nature acts, hence being at the "heart" of it? I personally think not, simply because the notion where an abstract man-made concept plans out a world far older than life itself seems at the very least controversial. This does not go to say that mathematics is as a whole, completely irrelevant in the natural world, but the number of situations where through mathematics only an accurate and valid prediction can be made are both few and incoherent. The fact that mathematics can be seen as being at the heart of nature stems from the fact that the mathematics systems we practice and believe in today have been empirically proven. But what were to happen if someone were able to show that is impossible to prove that a formal mathematical system is free from contradiction? ...read more.

at the very least to the vast universe of nature. One of the most famous, and seemingly pointless examples is Buffon's needle problem, posed in 1733. The problem consisted in finding the probability that a needle of length X dropped at random onto a piece of paper with equally spaced parallel lines X distance apart (same length as needle). The answer to the problem surprisingly turns out to be 2/?. Why ? should come up is still a complete mystery and raises interesting questions about the 'the unreasonable effectiveness of mathematics'. Among other things, ? has been around for c. 4000 years, and could be considered the isomorphic epitome of man's goal when it comes to understanding nature. Apart from its mysterious appearance in Buffon's needle problem, ? is the most fundamental figure when doing any circle-related calculations - be it the area, circumference, radii, or chords. One can argue that the figure alone is proof that mathematics is at the heart of nature, however if we look closer at what ? really is, as a number: irrational (cant be written in the format x/y), and is therefore endless - it becomes obvious that it is not part of nature, but simply trying to mirror it. ...read more.

And yet, we still have no clear idea why of all number sequences Fibonacci occurs so often. Arguably, in some cases the correlation may be completely coincidental, however popular belief argues that in living examples it follows a particular pattern within the DNA, because that particular pattern was the most effective. For example in plants, having 3 or 5 leaves mean a much greater exposure to light in comparison to having only 4 leaves, in a leaf : surface area ratio. The fact that it does not occur everywhere means that either the sequence is wrong, or that it is a homomorphism, and merely shows part of a much larger code we are unaware of. I think that our mathematics at best, can be identical to a small part of nature - homomorphic to nature. Which basically means that all our mathematics can in one way or another be related to a natural element, on the other hand we will never know if the homomorphism we take for isomorphism is what it actually is, or if we were wrong all along and it is not. Additionally we will never know if we will be able to relate every natural recombination with a mathematical equation. http://www.maths.surrey.ac.uk/hosted-sites/R.Knott/Fibonacci/fibnat.html http://en.wikipedia.org/wiki/Bijection http://www.physicsforums.com/showthread.php?t=101822 http://users.powernet.co.uk/bearsoft/Maths.html http://en.wikipedia.org/wiki/Pi http://www.gap-system.org/~history/HistTopics/Pi_through_the_ages.html http://mathworld.wolfram.com/BuffonsNeedleProblem.html Theory Of Knowledge for the IB Diploma, pages 207-211 ...read more.